Two newly emerging turf diseases, Rapid Blight and Brown Ring Patch, have recently been confirmed in samples received from golf courses in the UK and Ireland, and it is suspected that they are more prevalent in areas of fine turf than are currently recorded

During 2012, The Turf Disease Centre will be collating information on turf samples received for analysis that are positively identified with either of these two diseases, and a summary will be published later this year to show their recorded regional occurrence. The most important step in effective turf disease management is the identification of the cause and, with the apparent emergence of these new disease problems, this fact has never been more important.

In 2004, turf samples were received from a golf course in the UK where the greens were showing a progressive decline in turf quality. Patches of affected turf, up to 30cm across, were becoming red/brown in colour, watersoaked in appearance and thinning out due to the loss of Poa annua and Agrostis spp from the sward. Analysis of the turf identified the presence of a non-fungal organism called Labyrinthula within the plant tissues, and a disease known as Rapid Blight was recorded for the first time in Europe. 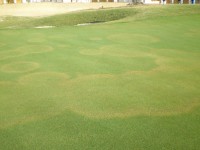 Subsequent collaboration between The Turf Disease Centre and Dr Mary Olsen at the University of Arizona confirmed the identity of the organism as L. terrestris, a new species of Labyrinthulid, that Mary had initially identified in 2002, as the cause of this increasingly important turfgrass disease.

Over the past three years, The Turf Disease Centre has received a small number turf samples affected by Rapid Blight that have originated from Ireland, Spain and Portugal, but it is believed that the incidence of this disease is much higher than has currently been recorded.

In Spain, the disease showed dramatic development of symptoms on creeping bentgrass greens (with patches up to 2m diameter) and extensive discolouration and turf loss on fairways (Fig. 1 & 2). 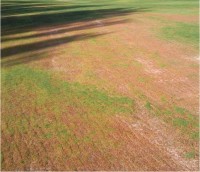 The severity of the problem is correlated with not only the grass type that is present but also ambient temperature and the level of salinity in the rootzone or applied irrigation. Poa species are very heavily affected by this pathogen, as too are Lolium perenne and Agrostis spp. Warm-season turfgrasses can harbour Labyrinthula within the plant tissues, but they don't show evidence of any disease. If these grasses are oversown with cool-season turf, the young seedlings inevitably become infected and disease symptoms will develop.

Symptoms can develop when temperatures rise above 15OC and salinity levels are >2.0dS/m (although Labyrinthula has been isolated from turf growing in much lower salinity conditions). Because the causal organism is not a fungus, most fungicides will have no effect, either on the organism or on the development of symptoms. However, research completed by Dr Olsen and other researchers across the USA has shown that the active ingredients - pyraclostrobin, trifloxystrobin and mancozeb - can provide effective control, but that results are much better if products are applied prior to or at the onset of disease, rather than curatively.

In order for the correct product to be applied effectively, the presence of this Labyrinthula sp. must be accurately identified but, because it is not a fungus, L. terrestris can't be cultured in the laboratory in the same way that fungi can.

During 2011, turf samples in which Labyrinthula was again detected, were received from golf courses in Ireland and the UK. In the UK, the symptoms on the affected course had been considered as being Anthracnose disease and managed accordingly (Fig. 3 & 4), but lack of recovery prompted an analysis that eventually identified the real problem. Due to the way in which Labyrinthula affects the plant, the sward initially becomes yellow, then becomes red in colour before the tissues eventually 'rot' and the sward thins.

The symptoms can appear very much like Anthracnose (or Take-all Patch disease in Agrostis-dominated turf), but there will be no distinct blackening of the crown tissues, symptoms that are typical of Anthracnose Basal Rot.

Rapid Blight is considered to be a unique example of an emergent plant disease potentially induced by human activity (Douhan et al, 2009) and I am sure that, in the future, it will be confirmed on more amenity areas where water with high salt content is used for irrigation.

Now that we have learned how to identify this disease, sample analysis can confirm its presence and, potentially, save significant management time and costs by allowing implementation of effective control options.

Detailed information on Rapid Blight disease can be found in the article Rapid Blight: A New Plant Disease, by Stowell, et al, 2005.

During 2007, a sample received for analysis from a golf course in Portugal, was confirmed as having the fungal disease known then as Waitea Patch. This was the first known record of Waitea Patch in Europe.

Since 2003, this new disease has been increasingly recorded on Poa annua turf across the USA and, more recently, on Poa trivialis (Wong & Kaminski, 2007). However, prior to the recognition of this problem in the United States, the disease was first recorded as developing on Agrostis palustris turf in 1994 in Japan (Toda et al, 2005) where the symptoms developed as brown rings and was given the common name of Brown Ring Patch.

On Poa annua, the affected turf shows symptoms of coalescing yellow rings, often with a darker green sward inside of the yellow ring. Unlike fairy rings, this new disease does not have any 'mushroom' smell associated with the infected turf, and a microscopic analysis of the isolated fungus can confirm the clear difference between the causal fungi.

However, if infected turf is incubated under conditions of high relative humidity for twenty-four hours, fungal mycelium will develop in the sward, at the base of the turf and over the surface of the exposed rootzone, and these symptoms can appear like those for fairy rings. Temperatures above 16OC can initiate disease development, and the symptoms are often more severe where rootzone nitrogen and water levels are low. Because the disease was initially recorded on Agrostis turf, the common name of Brown Ring Patch has been increasingly adopted for this disease, but Waitea Patch continues to be used by some researchers. 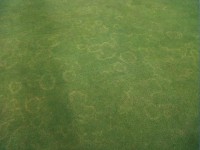 In 2010, The Turf Disease Centre received reports of unusual fairy ring developments on golf courses from across Europe (Fig. 5) and DNA analysis completed by AFBI (Northern Ireland) on the isolated fungi, has now confirmed the presence of this new disease in the UK, Ireland and Germany.

Due to the close similarity in symptom development to superficial fairy rings, it is likely that this new disease of Brown Ring Patch is developing more widely across Europe than we are currently aware of, but is being understandably misdiagnosed as superficial fairy rings. As with the non-fungal disease of Rapid Blight, Brown Ring Patch can be confirmed by laboratory assessment but, for this fungal disease, isolation of the fungus and microscopic analysis of the developing structures (as well an DNA analysis) is required for accurate identification.

The realisation that these new turf diseases are developing across Europe is due, in no small part, to Course Managers and Head Greenkeepers in recognising these atypical symptoms and requesting formal identification, and I am very grateful to them for working with me to confirm these diagnoses.

In addition, I would like to thank A. Pereira Jordão, Lda, Portugal for sending the first turf sample with Brown Ring Patch received in 2007, David Stansfield (David Stansfield Ltd) for collaboration regarding the recent Rapid Blight outbreak that was confirmed in the UK during 2011, and the Regional Managers of Headland Amenity Ltd and Tony Kvedaras (ITS Ltd) for collaboration regarding the outbreaks of Brown Ring Patch in Ireland and the UK.

During 2012, their continued collaboration on these new diseases will be very much appreciated and, in addition, the Technical Representatives and Area Managers at Everris Ltd and Syngenta Crop Protection UK Ltd have also indicated their willingness to notify me of possible outbreaks of these new disease problems.

Collaboration on this work is not restricted - if you believe that either of these new diseases are a problem on your course, please get in touch to discuss how we can help.

All details will remain confidential and only regional data will be used to identify the distribution of these diseases in any future articles.

Turf disease problems never seem to be too far away, but it is hoped that we can all work together for the benefit of our Industry.