A damaging plant disease that was until recently almost unknown in Britain has been confirmed in rare native juniper bushes at the Moor House-Upper Teesdale National Nature Reserve in the North Pennines of England.

The disease is caused by Phytophthora austrocedrae, a fungus-like organism that infects the plant through the root system and causes the foliage to decline and eventually die.

Juniper is a native conifer and a member of the Cypress (Cupressaceae) family of plants. P. austrocedrae infection was only confirmed in the UK last year on other trees from this family, at two sites in Scotland. 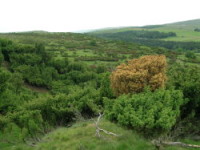 The source of the infection is unknown: P. austrocedrae is difficult to identify because it is rare, and there is only limited information available about it. However, the Forestry Commission scientists who identified it believe it can be transmitted in ground water, infected plant material and contaminated soil, making further spread very difficult to prevent.

It is especially serious because juniper is quite rare in the UK. The Teesdale juniper population is the second largest in the UK and is protected as part of a Special Area of Conservation (SAC).

Scientists from the Forestry Commission's Forest Research agency are undertaking further studies to confirm how damaging it might be on juniper, Lawson cypress and other potential tree hosts.

Natural England, which manages the site, is working with the Forestry Commission and the Food & Environment Research Agency (Fera) to survey the extent of the infection and consider how it might best be contained, as well as putting biosecurity measures in place for anyone working on the site

A survey of other areas where juniper is widely distributed will be co-ordinated by Fera to determine whether the disease is present elsewhere. The results, along with the outcome from an imminent consultation by Fera, will help to determine a longer-term strategy. Partner organisations across the UK have been alerted and information will continue to be shared.
Control plans will be developed in discussion with local landowners, farmers and other stakeholders in the area, and a meeting organised as soon as the three organisations have more information and draft proposals to discuss.

"Juniper habitat is rare, and a number of people and organisations are working hard to protect and restore it. It is therefore especially disappointing to learn that this very damaging disease has affected such an important site in England.

"We join our partners in Natural England and Fera in urging everyone who works at or visits this site to co-operate with the measures we are developing to prevent accidental spread of the disease. By taking these precautions we stand our best chance of preventing the disease spreading to other places."

"This is a serious outbreak for juniper trees in Upper Teesdale. Now the disease has been identified, we are working with the landowner, Fera and the Forestry Commission to put plans in place to contain what we hope is a single outbreak on juniper. We will need the help of neighbouring landowners, farmers and organisations in drawing up our plans and assisting with the measures to tackle it."

"This is a significant finding, the first of its type in Europe, and we are working closely with our partners to tackle the situation in Upper Teesdale. We also need to see whether the pathogen is present elsewhere, because this will influence our longer-term strategy. This additional survey work, together with the consultation that we plan to carry out, will be important in moving forward."

Further information is available from www.forestry.gov.uk/paustrocedrae.

• The Government recently launched the Tree Health & Plant Biosecurity Action Plan to ensure that the UK's defences against tree pests and diseases are as robust as possible.