Imants have announced a new package deal on two of their most popular products, which they say, "Will solve all of your compaction and aeration problems without disrupting play for under 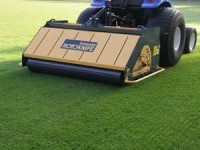 generation all gear drive 2006 model 1.55 metre Shockwave Revenge Decompactor, are now being offered in the UK at an impressive £9,950.00 for both machines when purchased as a pair. 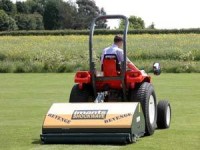 All bought in hardened special quality steels, are now sculptured using space age high - pressure water cutters, which apparently do not use any heat process that would adversely affect the temper and hardness of the metal. "This results in a huge cost saving because we do not have to re-harden components after we have finished precision engineering them" enthuses Reynolds, and adds "The benefits to the end user are enormous; two years ago the purchase of a Rotoknife and 1.5 metre Decompactor from Imants would have set you back £15,000 for the pair, today you can buy both significantly improved machines for around 33% less money, now that's what I call progress!".