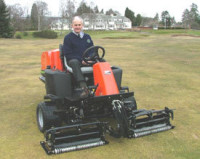 Alan Holmes and his greenkeeping team at The Blairgowrie Golf Club in Perthshire have taken delivery of a new greens mower and a new tees and surrounds mower from Fairways GM, Ransomes Jacobsen's recently appointed dealer for Scotland.

The new Jacobsen Greens King IV is the 12th such machine to have been purchased by the 116 year old club over the past decade and a half, while the Jacobsen AR3 is the very latest rotary tees and surrounds mower from the Ransomes Jacobsen range.

"I've had 14 years experience using Jacobsen cylinders," said Alan Holmes, "and there's nothing to beat them. The quality of cut is first class. The AR rotary system is the best I've come across for mowing longer grassed areas. It appears to lift the grass before cutting and leaves a very good finish. We already use a Jacobsen AR250 rotary for maintaining the semi-rough and the system on the AR3 is equally superb."

Alan's team has also been testing the sister machine to the AR3, the TR3, which is built on the same tractor platform and has the same tried and tested cylinders as the Jacobsen Tri-King.

"The quality of the cutting units and offset cylinder configuration on the TR3 helps when trimming round bunker edges. Both machine are highly manoeuvrable and very operator friendly," he added.

The Blairgowrie Golf Club was founded as a private members club in 1889 and is situated in the heart of the magnificent Perthshire countryside. The Club has three courses; the Rosemount and Lansdowne championship courses plus the 9-hole course, all set in heather lined avenues of pine and silver birch.