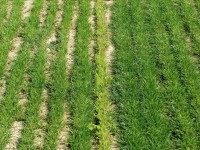 It has added Extreme RPR to its range for 2013, a grass seed which complements the existing and hugely-successful BAR Extreme.

Extreme RPR combines the proven benefits of the dwarf perennial ryegrass blend BAR Extreme with RPR creeping ryegrass technology, through the addition of the cultivar Barclay II to give superior establishment and recovery, wear tolerance and surface stability for medium-fine turf on golf courses and summer sports pitches.

As Barenbrug's best-selling golf product, BAR Extreme is already renowned for its characteristics as a high-performing perennial ryegrass mixture offering a great combination of wear tolerance, fineness of leaf and aesthetic value.

But now Extreme RPR gives greenkeepers an additional option when focusing on specific areas of their course.

Barenbrug's Research and Development Manager in the UK, Dr David Greenshields, explained the key element to Extreme RPR is the cultivar Barclay II, which is a creeping ryegrass.

A specific feature of Barclay II is it has tillers that are not only longer, so they will spread further, but will also generate growth from the end of the tiller.

As a result, Extreme RPR offers greenkeepers a new weapon in their armoury to maintain and improve the wear tolerance on their courses.

"Its ability to spread makes it particularly beneficial on golf courses for repairing divots and tees." said David. "The aim of any divot mix is to regenerate the playing surface as quickly as possible. Perennial ryegrass is often used for speed of establishment but Barclay II offers a further dimension by being able to 'fill in' gaps in the sward. In addition, anyone overseeding with a disc-seeder should see far quicker recovery between the familiar ensuing 'seeding lines'."

With BAR Extreme and Extreme RPR, 80% of the seed is the same. In Extreme RPR, the remaining 20% is Barclay II, while BAR Extreme contains Barsignum, an extremely fine-leafed cultivar, which makes it particularly good for areas that require closer mowing at less than 10mm. Barsignum is an exciting new variety in its own right - being the highest-rated grass across all species for Visual Merit in Turfgrass Seed 2013.

"The two mixtures complement each other really well - BAR Extreme is better than ever and Extreme RPR offers an exciting new dimension for fine-leafed perennial ryegrass usage." added David.