With the retirement of David Briggs and the appointment of two new Product specialists; Steven Dun and Simon Holland, Campey Turf Care Systems is starting their 30th year with some new faces and some new roles for established ones 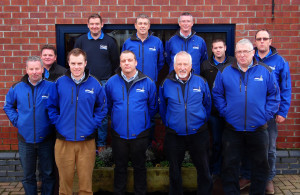 David had been with the company for 15 years. He joined Campeys as a Product Specialist in July 2000 and was very successful selling across the whole range of products marketed by Campeys. On announcing his retirement at the age of 67 David said "I have loved the travelling, meeting people from all over the world not just the UK and being able to promote an excellent range of products to an industry I love."

Richard Campey was sorry to see David depart. "During the past decade and a half, David has played a huge part in introducing new products and techniques to the groundscare and professionals in his are. We thank him for all of his efforts and contributions over the years. He has been an extremely valuable member of the team and we wish him a long and enjoyable retirement."

The two new members of staff have both come from the turf industry; Simon, 38 has gained significant experience in machinery sales during his time with a well-known agriculture and groundscare dealership in Nottinghamshire. Simon will be covering the UK east of the M1 from York down towards Coventry and cross to King's Lynn.

Steven Dun married and in his late-forties, has achieved success as a greenkeeper in charge of an Open qualifying course. This was followed by branching into sales for Toro equipment and groundscare machinery for several years. Steven will be responsible for covering south of Birmingham towards Somerset and across to South Wales and east as far as Norwich.

The new Product Specialists are joining one of Europe's largest independent grounds care machinery dealers. Steven and Simon will have the advantage of selling equipment from some of the most recognised grounds care machinery manufacturers including Dakota, Imants, Koro, Raycam, Vredo, Omarv, Votex, VGR and GT Air 2G2 injector.

Other changes include new areas for John Campey - now Product Specialist for a large swathe of Europe including; Germany, Switzerland, Austria, and Italy. Lee Morgado has taken on responsibility for sales in France, Spain and Portugal.

For more information on the company and product range please go to the website www.campeyturfcare.com.