by Football Foundation
in Synthetics, Schools & Colleges, and Football
on 04 Jul 2018

Stockton Town FC, nicknamed The Anchors, celebrated the completion of their first team facilities in County Durham recently, with help from Stockton Sixth Form College. The club have been able to install a state-of-the-art all-weather pitch, new changing provision and a seated spectator stand on a site shared with the College. 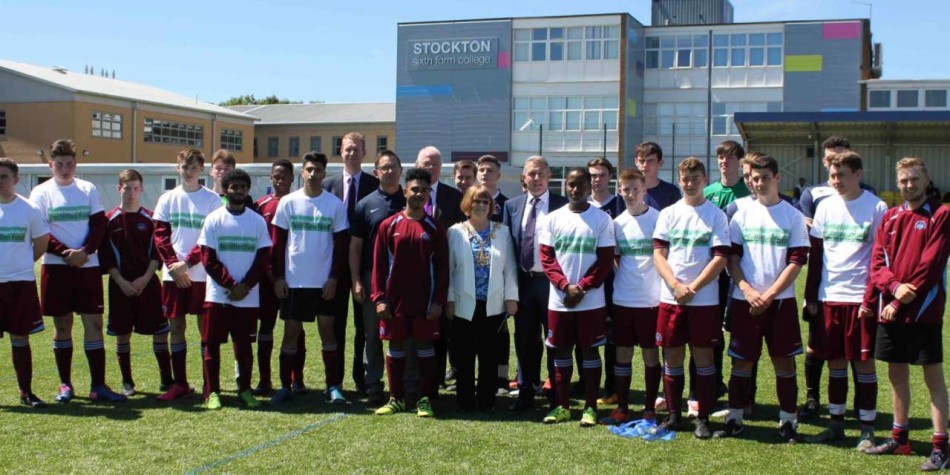 The project was made possible by a grant from the Premier League & The FA Facilities Fund, which is delivered by the Football Foundation. Premier League investment through the Football Stadia Improvement Fund (FSIF), the sister organisation of the Football Foundation, was also awarded. The new facilities have allowed the club, and the local grassroots game, to achieve unprecedented success with Stockton Town FC's recent appearance in the FA Vase Final of 2018.

This is in addition to Stockton Town FC's existing facilities nearby, including: four full-size pitches; two 9v9 pitches; four Mini-Soccer pitches; a training area and a six team changing pavilion, originally developed thanks to £424,000 of investment through the Football Foundation back in 2008.
The existing facilities were at full capacity with the club, so did not allow room for progression. By moving the bulk of their first team's training and fixtures to the all-weather pitch and new supporting infrastructure, Stockton Town FC have been able to free up space at their existing site. This will help them to retain players as well as build up new teams. Stockton Sixth Form College will also benefit from the new pitch, which they use during curriculum hours.

Stockton Town FC were awarded a £281,691 grant from the Premier League & The FA Facilities Fund towards the new all-weather surface. The project has also included the installation of a second changing facility, nearer to the 3G AGP, and a seated spectator stand. Both were supported by separate FSIF grants totalling £63,265. This was necessary for the site to meet the FA National Ground Grading Criteria requirements, especially with the club's promotion to Step 5.

Stockton Town FC worked alongside the Football Foundation and the Durham FA to compile a five-year Football Development Plan, which is a vision of how sport will be played on site with an emphasis on increasing participation.

By relocating their first team to the new facility, the club have created more room to grow at the original site. An overall increase in football participation of 229% is expected as a result, with plans to increase the number of teams from 22 to 31. Of the nine new teams, four will be girls' sides - supporting a predicted 394% growth in on-site female football participation.