Littlehampton Golf Club, situated close to the banks of the River Arun on the south coast of England, has purchased a fleet of new Jacobsen mowers from local Ransomes Jacobsen dealer, Ernest Doe and Sons Ltd 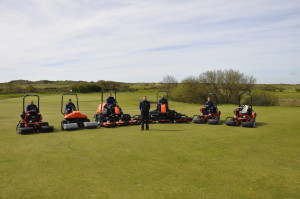 Michael Mead is the head greenkeeper and leads a team of four greenkeeping staff plus a part-time greenkeeper who works four hours a day. He has been at the club since 2008, having moved along the coast from Rustington, where he worked for six years after leaving school. He was promoted to first assistant in 2014, then shortly afterwards in 2015 was again promoted to head greenkeeper on a trial basis. Impressed with the way he stepped up and performed in this role, the club confirmed his appointment in January this year.

Littlehampton is an 18-hole course, predominantly links in style, especially those holes that abut the English Channel coast with other holes taking on parkland characteristics. With wide, open fairways a feature of the course, productivity is important and that's the prime driver behind the purchase of the Jacobsen Fairway 405 mower.

"The Fairway 405 is an excellent, highly productive mower; it really gets us around the course ahead of the members, he said. "We've also purchased three Jacobsen GP400 triplex machines; one fitted with tees units and the other two with 11-blade greens cylinders, both with rear roller brushes. We tried competitor machines, but none matched the manoeuvrability of the GP400 on our tees and some of the smaller greens. The swing-out centre unit is a real bonus, especially when checking height of cut and carrying out routine maintenance. Another factor in our purchasing decision is the service we get from our dealer, Ernest Doe; it's always of a high standard and this is very important to us."

The club is experiencing a renaissance following a period when membership fell to 400. The appointment of a new secretary, Graham Gain, two years ago has re-energised the club and seen numbers rise to more than 500 today.

"I have an excellent relationship with Graham, and he has supported the greenkeeping team from the day he was appointed. The investment in new equipment is testament to the club's vision and we recently achieved a top 18 ranking in the south of England by National Club Golfer magazine. We are also receiving great feedback from the members and that generates good positivity within the team," Michael concluded.