Red thread (caused by Laetisaria fuciformis) appears to be becoming more aggressive in some parts of the South of Britain. In a number of 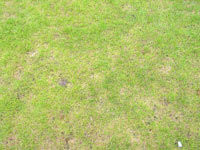 The disease is prevalent on lighter soils but especially on sports pitches and golf fairways as well as rough. However, the presence of red thread in fertile environments such as golf greens is also increasing in certain parts of the UK, although the East of England has significantly less incidence of red thread compared to the rest of the country (Figure 1).

FIGURE 1: Frequency of red thread in each of seven regions throughout theUK and Ireland. 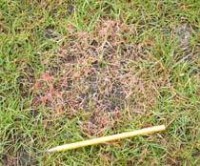 There are several questions that currently seem to have no answers. Are these new strains of "super red thread"? Has the disease become less sensitive to nitrogen application? Is the proliferation due to climatic factors? Whilst this article does not answer these questions, it provides a discussion and possible alternative management strategies to reduce the impact of red thread disease.

The symptoms of the aggressive red thread in the south are:-

Traditionally, red thread developed in lower nitrogen conditions and was sometimes an indicator that greenkeeping practices were not excessive with regard to fertiliser (nitrogen in particular). Generally, an application of nitrogenous fertiliser "controlled" the disease and the damage grew out.

The prevalence of red thread on lighter soils and the quantity of rainfall during recent years may have caused nitrogen and possibly potassium to have leached out to a relatively low level (perhaps high enough to not show deficiency, but low enough to make some ryegrass cultivars more susceptible). Perhaps past fertilizer practices to sports pitches and fairways may now be too low or infrequent to protect the sward from attack.

The causal pathogen may have mutated to become more aggressive and less influenced by nitrogen applications. However, it is also possible that we have selected 'nitrogen-tolerant' isolates of L. fuciformis by continually using nitrogen to control outbreaks. If the pathogen progressively becomes tolerant to nitrogen the more we apply it for control, the more we may select this isolate. Eventually this isolate flourishes, surviving all nitrogen applications and further control measures are required. This leads to an increase in fungicide use to control red thread which may also in turn lead to a tolerance to fungicides. The continuous use of certain fungicides as lumbricides may also play a role. Certainly, in one of the cases of the super red thread, fungicides were short-lived in their effectiveness-a costly business on football pitches.

Despite what has been written previously, a light feed may help the turf to out-grow the disease. A nutrient test should be taken on light soils to check for phosphorus, potassium, magnesium, calcium and pH. Once the results are established, an appropriate feeding programme can be identified.

To give the sward a fighting chance, regular aeration and decompaction of soils should be considered. Appropriate heights of cut to reduce summer stress will help.

Monitor the weather! If a warm wet spell occurs (such as June 2002) then beware. If a feed is due then consider application. Also consider brushing the sward to remove excessive moisture and reduce disease risks.

In one of the cases of severe red thread trouble, it was discovered that all the varieties of fescue and ryegrass used for a number of years had little resistance to red thread. Whether this was a coincidence is unknown but, in future, varieties with the best red thread resistance will be used. In time, it is hoped that a sward will develop with better resistance-watch this space!

If the outbreak is severe then treatment is likely to be necessary. Choice of a curative or eradicant fungicide, preferably with a systemic action, is most suitable. Protectant types can take time to work and seem less effective on aggressive red thread strains. This must be a last resort as the costs of annual applications of fungicides to large areas are very high and may eventually lead to pathogen resistance.

Control should be a mixture of good sward management, good observation and use of cultural controls. Occasionally the bottle (or box) needs to be reached for to keep sanity and the sward alive.

I would be most interested to hear from Groundsmen/Greenkeepers to see if the "super red thread" is widespread. Dr. Ruth Mann, our Plant Pathologist, would also like samples of the strain.