Ransomes Jacobsen has announced the launch of the Jacobsen GP400 ride-on triplex greens mower. Replacing the popular G-Plex III, the GP400 continues the innovation synonymous with Jacobsen name. Production begins in December and the first machines will be available early in 2011.

This new mower retains many of the features of its predecessor including a swing-out centre unit for easy maintenance and adjustment, the legendary cutting units with a choice of 7, 9 or 11-blade cylinders and a Kubota 3 cylinder diesel engine developing 13.2KW at 3200 rpm.

However, the Ransomes Jacobsen design engineers have introduced numerous improvements to produce a ride-on greens mower that is worthy of the Jacobsen name. A new tank design incorporates the fuel and hydraulic reservoirs in a single 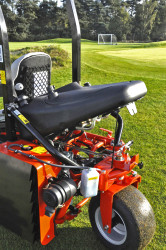 moulded unit providing better weight distribution and improved stability. As the fuel tank empties it has less effect on the machine's centre of gravity and a sump in the bottom alleviates fuel starvation on slopes. The tank is hinged and can be lifted to provide much improved access to the engine compartment with a 70% wider opening than on the G-Plex III. A moulded impression in the tank is fitted with an elasticated cargo net to provide a carrying facility for wet weather clothing.

The control layout and dash has been redesigned to improve ergonomics with more space for the electrical components and therefore easier maintenance. The standard Jacobsen joystick control featuring one-touch lift and lower sits comfortably within the unit, but a factory-fitted optional paddle, mounted on the steering column, is available for customers who prefer this form of lift/lower.

The battery cover is now double skinned for added strength and incorporates a small integrated storage tray, allowing access to the battery without lifting the seat. An all-new ROPS frame, fully compliant with ISO21299 and pre-drilled to take the optional dew whip holder, is fitted to a strengthened chassis that reduces vibration to the operator. In fact, whole body vibration has been reduced by 50% and noise exposure at the operator's ear level has been reduced by 2 dBa. Other factors contributing to reduced noise are the repositioning of the air filter beside the radiator and the addition of louvered panels to the radiator to deflect noise away from the operator. 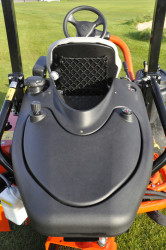 m has been adjusted to improve the view of the right-hand cutting unit. The steering arm clamp, which enables the arm to be positioned for the optimum comfort of the operator, has been moved for easier adjustment.

From a maintenance perspective, a new valve block design has reduced the number of individual valves, which reduces complication and makes for easier servicing, while reducing the potential for leaks. As stated previously the swing-out centre cutting unit allows easy access for changing the height of cut and routine inspection and maintenance. Better access to a much improved engine bay will also be of benefit to equipment technicians.

A petrol-engined version of the GP400 has also been introduced, featuring a Briggs & Stratton V twin, air cooled petrol engine, developing 13.2KW at 3400 rpm. Although the petrol engine version is not sold across the UK and Europe, like the G-Plex III it will be exported to the USA, where 'gas' powered mowers are the norm. Backlapping is now standard on both diesel and petrol models.