by External source
in Industry News
on 01 Feb 2013 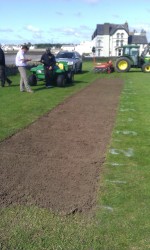 The head groundsman of an educational establishment with sports fields on the exposed coastline of the Isle of Man has praised a brand new Barenbrug grass product for creating top class playing surfaces that stand up to extreme weather conditions.

Mike Atherton said strong winds, salty air and the lack of nutrition in the soil had meant indigenous species of grass struggled to thrive under the prevailing conditions at King William's College at Castletown, which is located on a raised beach on the Irish Sea coast, where grass regularly failed to establish post-germination.

But since conducting trials with Barenbrug using a unique blend of perennial ryegrass and fine fescue cultivars - selected specifically for increased tolerance to salt on links golf courses or coastal playing areas - the school has seen a dramatic improvement in the quality of the playing surfaces and the overall health of the grass.

Those trials have led directly to the development of BAR Salt & Drought, which has now been launched.

"We have a very difficult climate in which to grow certain grass species," said Mr Atherton, who has worked at the school for over a decade. He had 'struggled to offset the severe problems of salt tolerance' until he contacted Matt Williams, Barenbrug's North-West Regional Manager.

Mr Williams visited the site, offered meaningful advice, and suggested products that could help in the first instance such as BAR Extreme, which were tried with great success on the cricket square.

Mr Atherton said the blend used in the trials that led to BAR Salt & Drought had increased the wear tolerance, notably during the harsher winter months, and the grass looked significantly better and had not been affected by disease.

"We were absolutely delighted with the results and we are going to use the product from now on because we are confident that it works," said Mr Atherton, who manages 17 hectares of grassed area at the college.

Even when some of the pitches were under seawater, as waves swept over the beach, the Barenbrug grass performed much better than indigenous species.

For Mr Atherton there are environmental, time-saving and economic benefits to using BAR Salt & Drought, "I do not have to use fertiliser or bio-stimulants to keep the grass healthy because the Barenbrug grass is much more tolerant to the conditions, that is a large cost and time saving to me, and above all, Barenbrug prices are very reasonable."

The results from BAR Salt & Drought trial have been noticed throughout the school.

"The product is now being used on the first team football and rugby pitches and the teachers have really appreciated the changes that has made - we plan to over seed the whole area in the future," he said. "We have also been delighted with the support, back-up and advice we have received from Barenbrug; they are such a professional company to deal with."

Matt Williams said he was delighted to have been able to help Mike at King William's College and utilise Barenbrug's excellent research and development facilities to improve his grassed areas.

"The trials at King William's have helped very much in the research and development of Salt & Drought.

"We trialled different species of rye grass and fescue in plots along the edge of the sea wall so they received the very worst of the weather; on the basis of the results we were able to put the Salt & Drought mixture together," said Matt.

"It is also good to know that we have been able to help Mike and that he is very pleased with the outcome."