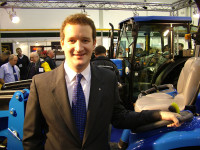 Henry, aged 28, brings a wealth of experience to the position. He previously spent four years working for John Deere, joining straight from university as a graduate trainee. He made rapid progress to become a Sales Instructor and then an Aftersales Area Manager.

Most recently, for two years before joining New Holland, he worked for himself, founding and managing his own landscaping business, which employed two other people. Henry felt the opportunity to join New Holland was too good to miss and sold his company to a fellow landscape firm.

"This is a challenging role and I am looking forward to it hugely," says Henry. "Having worked both as a supplier and an end-user myself, I fully appreciate the machinery requirements of turf and grounds maintenance professionals, and I will really enjoy working with them."

Not surprisingly, Henry's spare time interests include playing golf. He also enjoys watching motor sports, and so he appreciates the power and build quality of New Holland's modern tractor fleet.