by Harriet Saywell-Lee
in Machinery & Mechanics
on 16 Jan 2014 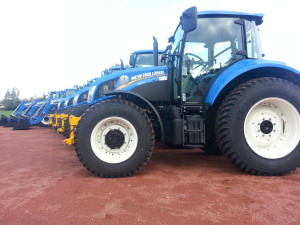 South Lanarkshire Council was well prepared for winter when New Holland beat the clock to deliver a fleet of nine T5 tractors.

The line-up of the famously versatile range was secured in a repeat deal with Lanark-based Bryson Tractors Ltd and included four units kitted out with New Holland loaders.

Some of the T5s will be used for snow clearing and gritting, helping to keep the roads open, so their well-known reliability and ability to handle a range of challenges will be vital.

With a population of 310,930, South Lanarkshire is Scotland's fifth largest local authority. Agricultural land makes up almost 80 per cent of the 684 square miles the council administers across central and southern Scotland.

Bryson Tractors had to move fast when the order was originally placed on August 22nd as the council demanded a tight turnaround. The hi-tech fleet was assembled, ready and delivered just over a month later on September 26th.

The T5 is perfect for municipal operations as it is equally at home in the field, on the road, in the shed or in the yard, and is able to turn its hand to transport, PTO, linkage or groundcare applications.

The New Holland tractors' delivery is the latest result of a mutually beneficial relationship between Bryson Tractors and South Lanarkshire Council that goes back eight years.

In 2005 the council first hired New Holland tractors and verge cutters, in 2008 it purchased a fleet of large tractors, and in 2010 it took delivery 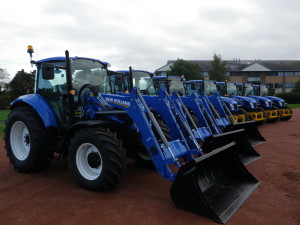 of a fleet of compact tractors for gritting and snow, with the majority still in use.

Bryson Tractors managing director Nancy Bryson said: "We're proud to have given such a good service over the years that South Lanarkshire Council has trusted us to come back repeatedly for more machines.

"I think our strong relationship with the council is founded on New Holland machines' reliability, plus the fast back-up service we provide when they need help.

"The after-sales support and durability combine with New Holland's cutting edge technology to make products that simply offer much better value over their lifetime than other brands."