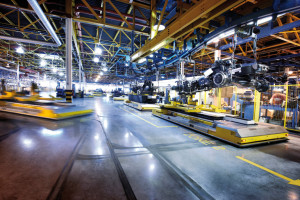 I always find factory visits interesting and thought provoking, and so it was during a visit to New Holland's facility at Basildon. The size and scale of operations involved in producing a complete vehicle, and the logistics required to keep the two kilometre long production line operating, is staggering in terms of inputs, design and investment.

My invite was courtesy of Richard Campey, who is one of only two designated New Holland dealers in the UK for their groundcare equipment.

Richard had also invited a number of his loyal customers, making up an interesting group of turfcare professionals that included groundsmen from Manchester United and Arsenal, select Local Authority contractors and a couple of golf greenkeepers.

Campey have, themselves, invested heavily in New Holland tractors, using them to power most of the specialist groundcare equipment Richard has been developing and importing over the years. He uses a wide range of models and swears by their build quality, performance and value for money.

The visit began at New Holland's brand new visitor centre and showroom, a large, purpose designed facility that provides the company with an opportunity to showcase their latest products whilst, at the same time, showcasing the company's history and popular tractors of times gone by.

We were then given a short presentation on the history of the company in the conference centre. 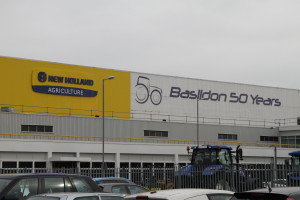 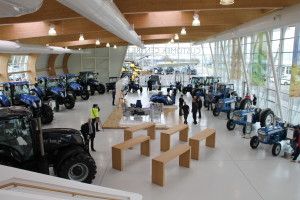 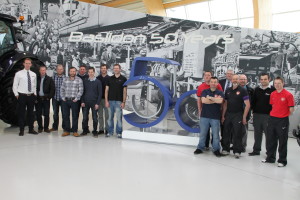 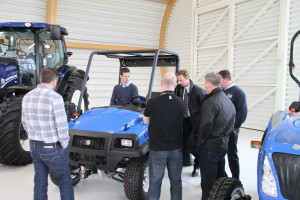 In 1907, Ford came out with the prototype for the world's first mass produced, gasoline powered tractor, named an 'Automobile Plow'. By 1917 this tractor went into actual production and was renamed the Fordson Model F and produced by a new business, Henry Ford & Son Company.

In 1939, Ford introduced the 3-point hitch on the 'N' tractor Series, one of the most successful tractor families ever. Ford was a major player and its tractor division had been responsible for a number of industry innovations, including the use of power hydraulics, rubber pneumatic tyres, diesel engines, and the 3-point hitch.

The construction of a purpose built factory for the fully integrated production of tractors began in 1962, with the 15th May 1964 seeing the very first tractors go down the production line at Basildon, Europe's most modern tractor manufacturing facility. A quarter of a century later, in 1989, over two million engines had been produced and the now iconic Ford 7810 Silver Jubilee model was launched to commemorate this important milestone.

Another key year for Basildon was the unveiling of the state-of-the-art visitors' centre in 2012, the same year the plant achieved Bronze World Class Manufacturing status and the UK Prime Minister, David Cameron, visited the factory.

Since 1964, over 1.6 million tractors and 3.1 million engines have been produced at Basildon.

Today, the plant employs more than one thousand people dedicated to producing industry-leading tractors. The facility can accommodate more than 10,000 different product specifications and 85% of total production is exported across the globe. After an interesting delve into the past, we were given details of the huge investments being made by the company, especially into new technologies and the launch of the New Holland Golden Jubilee Tractors to celebrate 50 years of uninterrupted production of tractors at Basildon.

We were then introduced to a former employee, who now is responsible for conducting factory tours and on hand to explain the whole process of tractor production.

We began at the stage where the transmission chassis drive lines and engines are assembled onto fully gliding automated carriers that move these prime parts through the different stages of assembly. The next stage is the pre-paint and primer painting plant, and the unit is then passed on to the final top coat painting process. The tractor unit is then passed through several stages of assembly, where various parts are attached. All through the process, essential parts and fittings are delivered to the assembly line, (just in time) to be fitted to the tractor unit. At no time does the production line stop for parts; it is constantly moving.

Cabs are pre-assembled and brought to the production line and fitted within minutes, wheels are fitted and there are pre-delivery inspections including severe and robust testing of the finished product. At every stage of the production a number of checks and inspections take place to ensure the tractor meet the high standard of production.

It is hard to believe a brand new tractor comes off the production line every 4 hours; a testament to the management and resourcefulness of all the staff working at the plant.

It is not until you see it for yourself that you realise the amount of effort, time and resources it takes plus, of course, the massive investment in R&D and the design, layout and capabilities of the production line.

Even Richard Campey was amazed at the changes that had been made at the factory since his last visit, a few years ago.

Here are a few comments from some of Richard's customers:

Sean Edwards of Cropper Machinery, Stoke on Trent, was very pleased to have attended the trip - "It was very interesting and surprising too - I never realised just how many tractors were assembled here in the UK."

Joe Pemberton, Head Groundsman at Manchester United's training ground, also expressed amazement at the sheer scale of the operation and the exact timings of the production schedule - "It takes only 4 ½ minutes to attach the cab to the body of the tractor. Everything is very functional - precise, yet unhurried." 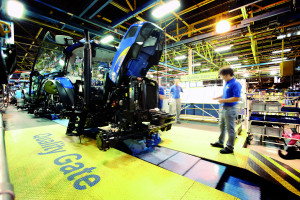 Barry Hutchings, from the Arsenal Training Ground, found his visit very informative - "It was a great opportunity to gain some insight into how these machines are produced. It was particularly interesting to see how the equipment we work with is actually put together."

At the end of the visit, Richard Campey thanked Jason Toogood, the New Holland North West Area Sales Manager, for his hospitality over the two days.

New Holland Dealer Business Development Manager, Richard Spencer, said, "We are very proud of the work we do here and of our facilities. To be able to show the people who buy and use our tractors just how much effort goes into achieving the best, and to get their feedback, is invaluable."

I also would like to thank Richard for his hospitality and giving me the opportunity to see, at first hand, the making of New Holland tractors.