0 New Holland has the power for Groundcare 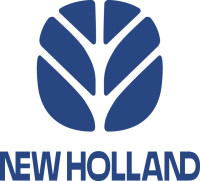 New Holland is launching the T4000 series of utility tractors, using the latest Tier III emission-compliant engines which offer increased power for greater efficiency and to work with an even wider range of groundcare implements.
Featuring 2 models with a new four-cylinder, 3.2 Iveco F5C engine which replace the Iveco 8000 three- cylinder 2.9 litre units fitted to the previous TN60/75 D/S-A range, and the 2 higher hp models the TN85/95D/S-A have their 4.5 litre NEF engines upgraded from Tier II to Tier III level.
T4000 tractors deliver up to 6hp more than their predecessors. Models are the 65hp T4020, 78hp T4030, 85hp T4040 and the range-topping T4050, which at 95hp should satisfy the demands of the most power-hungry operations.

Designed to meet the latest round of Tier III emissions legislation, the engines use state-of-the-art technology (All engines are fitted with turbocharger, intercooler and engine exhaust gas recirculation) to cut Nitrous Oxide (NOx) levels in the exhaust gases.

There is also an economic benefit: These turbo charged and intercooled engines reduce fuel consumption by up to 3% compared to the tractors they replace. Also, maximum torque is increased up to 404Nm with torque rise up to 40% to further enhance performance.
To help customers interested in reducing their carbon foot print these new engines are approved for B100 Bio-diesel (subject to conditions). 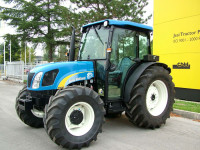 Likely to be a big hit with contractors, local authorities and managers of larger turf areas, the T4000 series features a true 40kph transmission as standard and offer a choice of transmissions to suit all applications from the 28x16 Synchro with Super Creep, 16x16 Synchro with Power shuttle, or optional 32x16 Hi-lo with Power Shuttle or with Creeper 44x16.

For operators who need to match capacity with time savings while avoiding turf marking, Supersteer™ can now be specified across the range including the 95hp T4050. This high-tech system gives a 76deg steering angle while working in conjunction with automatic four-wheel drive control to ensure that the tyres do not scuff the turf on the tightest of turns.

Using the right wheel equipment is also vital to give more powerful tractors a light tread, and purchasers can choose from the renowned Nokian range of tyres, factory fitted to their own specification.

Groundcare implements continue to increase in size, and acknowledging this, New Holland has increased the hydraulic lift capacity of these models by 10% compared to the TND/S-A. Maximum lift is now up to 2,900kg ready to carry the heftiest aerator or seeder.

New Holland's Marketing Support Alan Hawes comments: "As well as meeting the latest emissions legislation, the T4000 series offers groundsmen improved productivity from more power and lift, along with a 40kph transmission for extra efficiency when travelling between jobs. We anticipate that these tractors will prove highly popular with anyone who needs a real workhorse to take on a range of tasks."

The T4000 is perfectly complemented by New Holland's smaller tractor ranges for applications on fine turf or restricted access sites.

With a wide range of model sizes from 21 to 45hp, the TC series is ideal for golf course or sportsfield use. TC 21D or TC 24D at 21 and 24 hp respectively, offer a choice of 9x3 mechanical or two-range hydrostatic transmissions. These models have 670kg life capacity to handle a vast range of attachments.

For work in especially tight areas or on sensitive surfaces, the 21hp TZ21 and 24hp TZ24 provide a nimble solution - they are just 1175mm wide and are equipped with power steering and a two-range hydrostatic transmission.

Using a rear discharge design for the mower decks offers a considerable health and safety boost for grounds managers wishing to cut busy areas such as parks or golf fairways: debris is contained within the deck and the risk of objects being thrown out is minimal.

New Holland continues to develop its range with the professional groundsman and greenkeeper in mind. The MC out-front mower range has proved as popular for efficient grass cutting in parks and on golf courses as on demanding highways contracts. Now the need for collection on high profile areas has been fulfilled with a rear mounted grass catching system, available from February.

With such progression and commitment to upgrading and enhancing its product range, New Holland will be the one to watch in 2008.