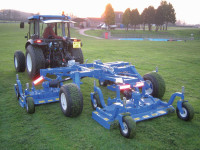 The seasoned operator, who takes care of the council's multiple sporting and leisure sites in South Gloucestershire, says the T4030 has made life so much easier.

"The 10 acre rugby and football area used to take about half a day to cut - but now it takes about an hour," Le Riche says.

The council purchased the 78hp tractor and New Holland 410GM rotary mower from dealer T.H. White Ltd about 12 months ago, after an old tractor became unreliable.

"We needed something powerful enough to drive the 410GM attachment but that could also be used for other tasks. I looked at a number of different tractors, and New Holland really stood out.

"We decided on the T4030 which has turned out to be a great piece of kit - it provides a broad spectrum of capabilities, allowing us to use it in a number of different applications."

New equipment such as this is a significant investment for a council - it needs to be reliable and high performing, and ultimately deliver a return on investment, Le Riche says.

"New Holland has delivered on those fronts. The increased output, low operational running costs and low depreciation have contributed to driving down our fixed costs, despite an initially higher purchase price. We expect this return to continue for many seasons to come."

With Le Riche taking care of three full size football pitches and a rugby pitch at the Mundy Playing Fields, a 17 acre park, numerous smaller play areas, a cemetery and other open spaces, he needs versatility, manoeuvrability and ease of use in one machine. 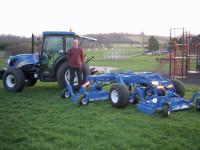 "We use the T4030 for everything, from sports turf maintenance to general mowing of the play area. As summer approaches we'll be looking to use the equipment for a range of tasks across the sites, so the fact that it's versatile - and quick to transport between areas - is a huge benefit. The manoeuvrability is unbelievable."

Standing at 6ft 7in, Le Riche also needs a cab that is spacious and user friendly: "The design is intuitive and straightforward to use," he says. "The 16x16 Power Shuttle transmission, which features clutchless shuttling via a steering column mounted lever also greatly reduces operator fatigue. Cab comfort is obviously a key factor and the T4030 delivers.

"In addition to the tractor, the 410GM rotary mower (with a 3.7m cut) has a huge output, but also folds up below 2.5m for transport, so it is versatile enough to get into some of the tighter spots too. The individual decks float on large wheels so it can cut undulating areas, and set at 5cm, provides a great finish while staying safe on the rougher terrain."

Le Riche says the unit's improved work rate and the back-up supplied by the dealer were two of the decisive factors in vehicle selection.

"T.H. White Ltd provide a first class service. We haven't had a problem with the tractor, but they're always available if we have any questions or need advice. They also put the complete package together for us, and we have a single point of contact, Mike Harris, who looks after us really well."