0 New Hollands geared up to multitask 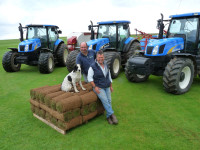 With the company based in Dorset and serving customers as far afield as Bristol and Southampton, turf growing is highly important to Andy Baillie and his team - to the extent that farming policy was changed recently to avoid clashes between cereal and turf growing operations, with greater use of contractors on the 900-acre agricultural side. This year, turf occupies 200 acres, and as well as supplying and delivering turf to landscapers and householders, the company also has its own landscaping arm.

"Turf takes priority," Andy explains, "But we still handle all of the combine harvesting on the farm, which works well as it takes place in August when the turf business usually slows down."

Tractors also have to be dual purpose, with the right combination of reliability and good dealer support essential to avoid downtime with such a busy workload. 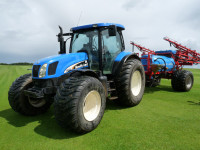 Thus Sherborne Turf has recently returned to New Holland after using other brands, investing in three tractors through dealer Buglers of Marston Magna. Andy points out: "It is important to have a good dealer close at hand - with our previous tractor brand, not only was it less convenient to call a fitter out, but the distance also increased service costs. Buglers are just down the road."

Tractor choice was also crucial, with the final selection being a 136hp TS135A, 101hp T6010 Delta and 155hp T6080 Range Command, joining a T4000 which is permanently fitted with a wrap around turf harvester.

"The big T6080 is fitted with agricultural tyres and is mainly used for farm work, but is brought in for ploughing and preliminary cultivations on turf ground, while the T6010 can be fitted with either agricultural or turf tyres," Andy explains. "The TS135A also moves between the farm and the turf side." He comments that it can be a bit of a juggling act to secure the right tyres, but the Nokian ELS range offered by New Holland give the essential versatility needed for his business. 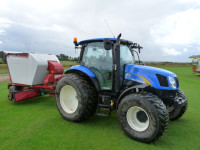 Finding the right transmission was another consideration. "New Holland does offer a wide range of transmissions, so we were able to choose exactly the right system for our needs. We tend to steer clear of a lot of electronics - the tractors stay with us for a long time as we don't put a lot of hours on them, so they need to be reliable and we find that simplicity is best."

On the T6010, Sherborne Turf opted for Electro Command, which offers 16x16 speeds as standard, and 32x32 with a creeper box, while the 155hp T6080 is specified with the 19x6 semi-powershift Range Command box.

"We did look at the Power Command full powershift box," comments Andy, "But we didn't need that level of sophistication, and more importantly the Range Command transmission is straightforward enough for any driver to be able to jump on the tractor and operate it."

With many of the implements needed for turf growing being hydraulically driven, such as the nine-gang Kesmac mower used for finishing, hydraulics also have to be straightforward to operate and reliable.

"We chose mechanical spools to make operation of the mowers easier - it's simply a matter of selecting the right lever."

Sherborne Turf has a long history with 'blue' tractors, having operated some of the old Fords and Fiats during its 30 year history. "The tractors have certainly moved on - the old Fiat cabs were 'cosy' but the modern ones are much more spacious. I'm still getting used to the idea of having a passenger seat rather than the old toolbox!" Andy comments.

With light soils predominating, weight of machinery is always an issue, says Andy. "Power to weight ratio is important to avoid compaction. New Holland scores because the tractors are lightweight for the power that they offer."

He adds: "As a business, we may appear to have a lot of horsepower for our needs, but this gives us the flexibility to avoid having to swap tractors around all the time. And the range of tractors and options that New Holland offer has enabled us to meet our precise needs with machines which we expect to own for a long time."