For the Commonwealth Games, a warm up track was built adjacent to the City of Manchester Stadium for the athletes to use for training. Following the games and our tenancy beginning at the stadium, the track was converted into a 6,000-seat athletics stadium, which played host to a number of track and field events this summer, most notably the AAA championships, which doubled up as the Olympic trials. Having been involved in discussions regarding the infield, the club wanted to use this venue for Reserve Team games as it was closer to 'home' and also provided an opportunity to explore other revenue options such as opening the souvenir shop and the catering facilities at the stadium for longer hours on match nights. 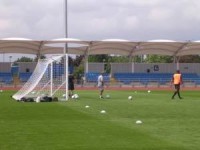 After the pitch was officially handed over from the contractors at the end of July, we were still far from happy with the levels and brought in Mallinsons to open up the surface with their vertidrain, using 25mm tines at 50mm centres and going 150mm down. The reason for this was that sand banding was carried out previously and was never brushed into the surface afterwards so we were left with ridges that made the pitch impossible to cut lengthways, (as the bands were going across the pitch). Aeration was carried out near the end of July with 50 tonnes of sand worked in to try to rectify this, but it had very little impact - we therefore brought our own contractors (Mallinsons) in afterwards. 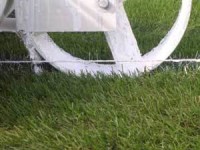 We are trying to look as positively at what remains as possible. Rome wasn't built in a day, but a lot of hard work will go into the next few months to get us through this first season and then we will make ajudgement call on the pitch after that period.

Our first game was due to be staged on August 18th, against Newcastle Reserves. As this was a new venue, the Reserves trained on the pitch the day before and the pitch performed really well for the 1¾ hours.

Portable goals have to be used as there is solid concrete at one end of the pitch around 300mm down and at the other end communications ducting for the athletics timers, this meant that we could not get the required depth to concrete the sleeves in for permanent goalposts to be used. Obviously the use of portables has to be done with safety in mind so weights and metal brackets are used for safe, secure anchorage. Following training, the pitch was cut twice with the Toro 2000 at a height of 26mm, the same as the main pitch to keep uniformity as close as possible. As the second cut was being finished off, the heavens opened with 7mm of rain falling in half an hour, this was just the beginning though… 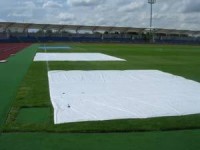 The near corner was covered with plastic waterproof sheeting to protect from the expected showers, these areas were still flooded and after forking them the water was still going nowhere, so rather than clear it with the Bowdry and make the surface softer, we covered them up and hoped for the best - covering areas with sheets took us back to the days when Maine Road was at its worst, and the use of such a method is something which we thought had been left firmly in the past - obviously not! 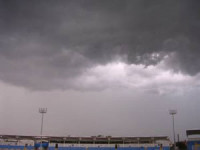 As the day went on, it stayed dry and an updated forecast at 2pm indicated that we may get a couple of heavy bursts, though this was unlikely and a minimum of 2mm going up to 10mm of rain if really unlucky was given to us -we waited with baited breath.

Around 4pm the clouds became very dark and lightning could be seen towards the west side of Manchester so we knew rain would come our way eventually.

Ten minutes later the heavens opened, and how they opened! Torrential rain fell for five minutes followed by ten minutes of hailstones, most measuring around 20mm in diameter. 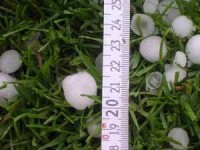 The noise on the stand roof was deafening and the pitch was transformed into a white surface resembling a snow flurry. Drains backed up around the stadium and soon the dressing rooms were flooding yet the rain didn't cease for a further 15-20 minutes - the hail was so severe that it smashed the top of the rain gauge in the main stadium. As well as the rain, strong winds were blowing across the stadium and blew the dugouts over.

Once the torrent had relented at around 5pm, the sunshine came out, though given that we already had water which was going nowhere from the day before, it was apparent that the game was never going to take place. The referee, on his arrival at 6pm, merely confirmed this and for the first time in 27 years, a game that the club has hosted themselves at first team and Reserve level was called off before it began. This was deeply disappointing, but given the freak weather and the fact that the pitch drains slower than any pitch I have seen there was no other option than calling the game off. Within a 15 minute spell of the rain at its worst, 14mm of rain fell.

The following week also brought steady rain and as a precaution, the pitch was multi-cored with 16mm tines to a depth of 60mm, the water this brought up to the surface was unbelievable! 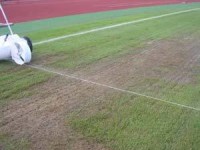 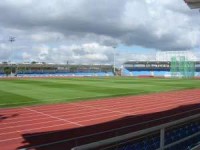 Thankfully the recent wet weather has relented-the rain gauge in the stadium showing 208mm of water for this month alone, though that is nothing compared to other parts of the country. The next game was played against Blackburn but the wet areas that have concerned us for the last few weeks are now being dug out after this game and relevelled. The turf there will be replaced as it has become extremely thatchy, Maine Road took 80 years to get this bad, the Arena pitch has taken just a few weeks.

The pitch does look a lot better; though it does somewhat mask the problem.

The coming season should be interesting to say the least!