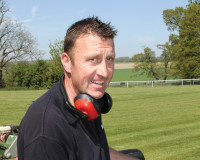 "There is a subtle difference between a Type 42 Destroyer and a triple mower ... but we are learning quickly!"
Chris Clyne, Chairman and Groundsman, Arundel Cricket Club

Arundel Cricket Club is one of the oldest cricket clubs in Sussex, having been formed in 1702 on land donated by the then Duke of Norfolk, with the proviso that the land only be used for cricket.

Those that know the area will be only too aware of the imposing castle that dominates the town and overlooks a cricket oval, a Sussex CCC outground where regular first class and high profile games are played. But, this is not the home of Arundel Cricket Club, a club which operates on a much tighter shoestring than their illustrious near neighbours, albeit that the current Duke of Norfolk is involved with both venues.

The club's Waterwoods Plain ground sits just off the A27, with imposing views over the South Downs. The club's thatched pavilion, one of just a handful in West

Sussex, recently played host to one of Pitchcare's cricket groundsmen' training courses, led by Martin Sampson, Head Groundsman at Cardinal Vaughan School. Sitting in on the course was the club's volunteer groundsman, Chris Marsden, and chairman cum groundsman, Chris Clynes. Both were keen to get further knowledge of cricket ground maintenance, and it is this inherent enthusiasm that has seen the club progress in recent years. The club now boasts three senior teams playing in both the Sussex and West Sussex leagues, and a successful colts section with more than eighty juniors from under 10s to under 16s, all now playing in the top tier of their respective leagues.

In the mid 1970s, the club purchased an additional parcel of land off the Duke to add a second oval to accommodate the growing number of teams. The original square, used by the seniors, has fifteen tracks, whilst the newer oval has a six track square for use by the colts and the third eleven development team. 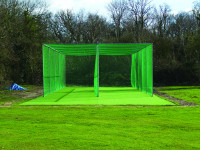 The club was awarded ECB Clubmark accreditation in November 2010 and is working towards Focus club accreditation.

Arundel Cricket Club is, like many others, heavily reliant on volunteers to run everything from the clubhouse bar to the grounds themselves. There is an overwhelming sense of 'family', evident in the splendid array of home made cakes and savouries served up for consumption by the course attendees. The whole club is immaculately presented and, during the training day, attendees had the opportunity to inspect the squares and see some of their machinery in use. Core samples were taken to show the delegates what lay below the surface and how certain physical properties can influence the performance of the square. Chris Clynes was keen to see the profiles on the main square, which showed very little thatch, no layering or unsavoury smells and a good root depth.

I was keen to find out how the club was being run and where they see its future, so I invited Chris Clynes to comment on his role and why he took on the dual responsibilities of chairman and groundsman, but there is much more, as he explains.

"I am the current Chairman of Arundel Cricket Club, having been voted in following the passing of the long serving Chairman late in 2010, but also sit on the main Social committee, the Colts committee and the Grounds committee. My groundsman colleague, Chris Marsden, sits on the Colts and Grounds committees.
We have both been involved with colts cricket for several years, with myself taking the Level 2 coaching badge back in early 2008. Chris's wife, Karen, is the current club secretary and ensures all the cogs are oiled and remain turning, and both Chris and Karen also run and manage the U13 and U14 teams, whilst I run and manage the U16 team and assist with the U15 team.

With the club having struggled for several years in relation to groundsmen, both Chris and I decided to get a little more involved as we have two grounds to prepare - a total of twenty one tracks - which are used for over seventy games per season. We currently hire in a part-time county groundsman who does the main square, whilst Chris and I are honing our new found Pitchcare skills on the small square, whilst also look after both the outfields.

We do, however, get involved with the day-to-day maintenance of the main square with watering, cutting and fertilising etc.,

as our part-time chap has only just started in earnest.

We have also taken it upon ourselves to learn as much as we can regarding machine repair and maintenance, so it's a great help with Chris being a long time serving Royal Navy Marine Engineer - you may have seen him in the recent HMS Manchester documentary 'Caribbean Patrol' - although there is a subtle difference between a Type 42 Destroyer and a triple mower... but we are learning quickly!

If honest, now that the season is underway, we spend nearly all our spare time at the club, which is every weekend and four evenings a week, cutting, preparing and undertaking general maintenance around the club. We have the invaluable help of another team member, Graham Twine, who undertakes work such as hedge cutting, patio and wall maintenance etc. He is landscape gardener, and his wife, Pauline, is also the club treasurer and all round good egg, and their son is a first team regular.

Post season, last year, Chris was away on nine months patrol with the Royal Navy so, sadly, was not around when we put the club to bed so to speak.
It was a baking hot day on September 16th when myself, with the aid of volunteer club member, Paddy Horne, and Club President, Rosemary Barry, turned up at the club to start the works. We enlisted the help of Arundel Castle head groundsman Lee Farquar, and his spreader, plus NuLawn's Pete Wilton and his deep scarifier.

Due to costs, we could only deep scarify the main square, which took about two to three hours to do, then about another three hours or so to fully blow out with a very heavy duty blower. Whilst this was being done, myself and Paddy were cutting back the small square to about 3mm taking as much off as we could, whilst Rosemary kept the tea and biscuits flowing. 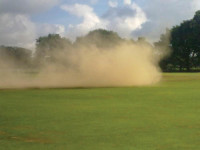 The next process was to spread the seed over both squares, which we did by hand to ensure a full covering. Then Lee utilised his tractor and spreader to apply approx 2.5 tonnes of loam to the main square and approximately 1.5 tonnes to the small square. As this was in 25kg bags, and done ten bags at a time, it was a long, hard, back-breaking job. After that, we brushed over the squares to ensure an even spread and then rabbit netted them both off. At the end of the day, just Paddy and myself were left doing the latter as it's a long tedious task and we finally got away about 7.30pm, having starting at 8.00am. Job done though and lots learned.

Winter was just a case of brushing off leaves and checking the rabbit netting and, although we would have liked to have cut the squares that were actually growing well, it was always just a little too wet. We did, though, manage to get the outfields nipped back twice which has proved very beneficial with the new growth.
In early March, Chris, Graham and myself did the first bit of pre-season work when we got the chance. This involved cutting the outfield again, taking down the netting, first high cut to both squares and first light roll. Following on from that, we continued to light roll and fertilise the now growing squares.

We actually spent most of April watering and cutting both squares, as it was so dry, and moved to the main roller at the same time, giving each square around twenty-five hours each.

To date, we have played several games on each. Both squares played well despite the early start, but you can see a marked difference in each compared to the one we scarified and the one we did not. The main square cored down to about six inches of good white, straight root with no thatch, whilst the small one cored only to approximately two inches of root with lots of deep thatch, so the plan next September is to deep scarify both - it shows the benefits.

For games, we are leaving the main square to the hired in groundsman, but Chris and I are using the small one as a learning curve. We have been cutting the selected track to approximately 10mm, seven to ten days prior to the game, and then rolling and watering. We continue to mow, reducing the height of cut by 2mm each time, plus watering, rolling, brushing and raking, until the Thursday before the Saturday game when we cut to 5mm and roll, but do not water. We have been giving a final cut and roll, plus marking out, on a Friday evening and, so far, it is working well.

We have been leaving a little bit of grass on, but are pleased to say that the first track we did had four games played on it, including two in one day, and the repairs have been minimal.

As groundsmen, both Chris and I fell into the role, as you do, and, having done the Pitchcare course, are both fully addicted to the fine art of wicket preparation, oh, and strips!