A package of new John Deere and ancillary equipment worth nearly £100,000 has just been delivered by Bristol based dealer B S Mowers to head groundsman Darren Ball at Bath Rugby's brand new training facility and club headquarters at Farleigh House, Farleigh Hungerford, near Bath.

The John Deere machines - which arrived at about the same time as World Cup winning fly half Stephen Donald of New Zealand joined the Bath squad - include two 2653B triplex utility mowers, one of which is used on the main Recreation Ground pitch in Bath city centre, a 3320 compact tractor, an HPX Gator 4x4 utility vehicle, a TC125 core collector, and two R54RKB walk-behind rotary roller mowers. The equipment has been bought on a five year lease from John Deere Financial, including a full dealer service contract.

Bath Rugby's move to the 19th century Gothic style Farleigh House was first announced in April 2010, when the club was acquired by businessman Bruce Craig. Full-time training started at the new site at the end of June this year, and work is continuing to convert the Grade II listed building into an elite headquarters and dedicated training facility, including a state of the art gym, changing rooms and medical/rehab centre.

Alongside the new building works and restoration of the main house, the club has constructed and landscaped a new full-size natural turf pitch and a half-size international 3G artificial pitch, while a second natural pitch should be fully in play by next spring. Darren Ball - who received the IOG Public Sector Sportsground of the Year Award in 2010 for his work at the Recreation Ground - is currently looking after both sites as well as the old training pitches, so reliable, versatile and hard-working equipment is crucial to help him keep on top of the work. 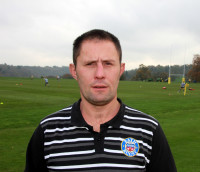 "In addition to the triplex mowers for cutting the grass pitches, the compact tractor is used with specialist Charterhouse attachments on the all-weather pitch, as well as a 1.8m rotary mower and a scarifier on the turf areas," says Darren. "The core collector is useful for cleaning up after the scarifier, as well as for picking up leaves and other debris around the lawns and the rest of the estate.

"As well as being a general runabout and materials transporter, the Gator can be fitted with a snow blade for clearing the approach roads and lanes surrounding the site when necessary. The walk-behind rotaries are used for cutting out pitch lines and tidying up after practice every so often, as well as for topping over the pitches after re-seeding.

"I've known B S Mowers' sales manager Simon Free since he was the mechanic at nearby Farrington Golf Club, when he did some contract work for me in the workshops at the Rec," adds Darren. "When the club needed new machinery for the move to Farleigh House, ideally we were looking for a reliable brand with similar values that could fulfil a lot of our needs. Simon had moved to the local John Deere dealership, so he introduced me to the area sales manager Colin Noad and the deal was worked out from there.

"B S Mowers could supply all the kit we needed, and I knew we'd be dealing with a reputable, reliable company. Once the new site is fully operational, it will give the club the opportunity to attract visiting international sides, so top quality facilities and presentation will be critical."