With the new revolutionary spray technology, Maxwell Amenity have worked on developing and optimising a paint formulation for the Graco Fieldlazer S90 .

According to Maxwell Amenity's Business Manager Dan Hughes; "The Graco Fieldlazer S90 is a fantastic line marking system but we quickly realised that no existing UK line marking paint has been developed with the purpose of application through a high pressure, piston pump system."

"We carried out an extensive amount of trial work on paints, experimenting with variables such as concentration and viscosity and then tested the paint from a performance point of view, looking at factors such the paint's aesthetic look, ability to dry quickly, longevity and retention on the leaf against wear."

With a 48bar pressure, the S90 was able to spray a neat concentrate very efficiently and effectively to cover the grass leaf with fine paint particles." The benefits of a neat paint application included :

• Paint dried onto the grass leaf quicker than water based solutions. This reduced the risk of ghost marks, potentially allowing play to occur sooner.

• Strength and brightness of lines were clearly observed.

• Where areas were bare or had limited grass coverage, a clear mark out was still achieved.

• The operator experienced considerable time and labour savings with no mixing and reduced refills of tank.

With the benefits of applying a neat solution established, various formulations were tested. The appearance and strength of the lines were observed, drying time on the leaf was monitored and mark outs were revisited to assess the longevity. 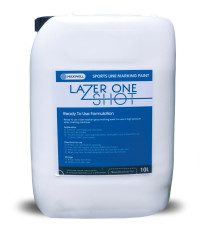 Finally the best overall performing paint was selected and production and viability to take to the market explored and evaluated. According to Dan; "It was at this stage that it became apparent that the quality against cost of the formulation through the Graco Fieldlazer S90 was very attractive to us and the end user".

The patented spray system found on the Graco applied 50% the volume of the new 'Lazer One Shot' paint compared to any other spray marker tested when fitted with an RAC 313 (10) precision Graco 'Contractor' spray tip and the fine spray coverage on the leaf was exceptional.

Mark out tests using just 10L of Lazer One Shot Paint applied neat through the Graco S90, created around 2000 linear metres or 2.5- 3 football pitches of mark out at the quality and standard that you would expect to see at top level stadia and venues.

The Graco Fieldlazer S90 and Lazer One Shot line marking paint are available from the Pitchcare Store or if you are interested in a machine demonstration, telephone 03300 881559 * UK Standard Call Rate.