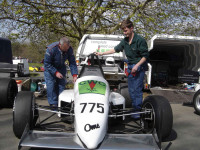 Was it the new CWC go-faster livery or a set of brand new soft racing tyres that gave Jonathan and John Stockley their extra va-va-voom at the Easter meeting of Hagley & District Light Car Club?

The pair both achieved personal best times on competition day at Loton Park, giving them a great start to the new hill climb season.

Before this season started, the father and son competitors from Complete Weed Control (Central Wales), sprayed three sections of the track - on Sir Michael Leighton's Shropshire estate - with MMC Pro for moss and algae, with the result that Club Secretary Dave Parr described it as "the gripiest" he can ever remember.

MMC Pro is a broad spectrum anti-bacterial disinfectant, fungicide, algaecide and detergent. It doesn't contain bleach or acids so it's safe for use on many exterior hard surfaces including plaster, monuments, slate, stone and brickwork of all types. It effectively tackles green and black mould, algae and moss and prevents them from returning and it's readily biodegradable to EC/OECD standards.

In recognition of the complementary treatment, the chuffed club officials gave them some free entries for later in the season. CWC (Central Wales) was also mentioned in the club newsletter "Between the Scenes" and was offered the opportunity to put up an advertising banner on the course.

Powered by an 1100cc Suzuki GSXR motorcycle engine, John and Jonathan's OMS P/R was having its first outing since being given its new CWC livery. Reaching over 100mph on the fastest part of the track, the logo might turn into a green blur when the car is racing, but it attracted a lot of extra attention in the paddock.

2007 is the Stockleys' third hill climbing season. Starting out with a 1600cc RAW Striker kit car in 2005, they graduated to the much lighter and faster OMS just before their second year of competition.

Much to his father's frustration, young John consistently beats him on the track and this Easter clocked a personal best time of 53.65 seconds on his second run. Nevertheless, Jonathan was mightily pleased with his own very respectable 56.4 seconds in the morning session.

Jonathan's strength is his fast start - which he puts down to a little excess weight giving him extra traction!

"I consistently achieve the best start times in the class," said Jonathan. 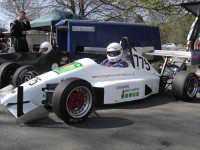 "I can cover 64 feet in 2.01 seconds - it's just the rest of the track I can't cover as quickly as John. He's really getting to grips with the corners - I'm just too cautious."

On the fastest stretch of the three metre wide bendy and sometimes steep track, the cars often exceed 100mph - with the driver barely 6 inches off the ground.

"Your heart is really pounding at the start," said Jonathan. "When the light turns from red to green you build the revs up to 5,500, let the clutch in and you are off - it's exhilarating, exciting and frightening all at once.