Hayter have announced the appointment of David Sturges as Sales and Marketing Director with immediate effect. David will be 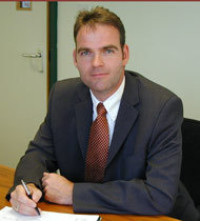 David has an MBA from Cranfield University and a BSc Honours Degree in Agricultural Technology and Management from Silsoe College. He has over ten years experience in the industry, specifically in engineering design, international sales and product management. Since December last year David has been carrying out the sales and marketing role at Hayter in a caretaking capacity. In his mid thirties, he is married with a baby son and lives in Sussex.

Commenting on the new appointment Derek Boulton said. "I am delighted to be able to announce this new appointment. David has consistently shown his abilities in the responsibilities he has had over the years in his career with Hayter, earning the right to be a principal leader in our company. Hayter have ambitious plans for the future and David will play a key role in achieving them."