Godfrey's of Sevenoaks have now announced their re-structured management team following the departure some months ago of General Manager John Rolleston after an innings of 21 years.

Chris Martin has been appointed the new General Manager with immediate effect. Chris who is 33 has worked at the Sevenoaks Company for 16 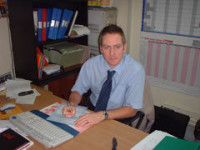 A John Deere agency is the focal point of their professional business, and the domestic arm is well equipped with Honda, Stihl and Allen plus a number of other well known names and of course John Deere products.

The re-organisation has also resulted in the company appointing Brian Grimes (52) as Sales Manager to oversee both the commercial and domestic sides of the business. Brian will be responsible for three commercial salesmen covering their Deere area of Kent and part of Surrey.

To this team has also been added a second mobile technician to increase their service to commercial customers including over 90 golf clubs.

Sandy Ramsay (25) has been promoted to Operations Manager and will be responsible for logistics, information technology and parts purchasing. Sandy joined Godfreys directly after leaving Hadlow Agricultural College.

In addition to mowing machinery Godfrey's also retail quality outdoor clothing, a range of quad bikes, both pedal and petrol fun karts and a line-up of John Deere toys. Godfreys suffered a bad fire not so many years ago resulting in their present modern building being erected yards from their original position but still well located on the busy Otford Road out of Sevenoaks.

Looking forward to the coming season Chris reckons they are well prepared to face 2004. He says that although workshop technicians are scarce in the area they now have a full complement and ready to tackle whatever 2004 throws at them. "We have a great team in place enabling us to deliver the highest level of customer service. The prospects look good for 2004 already and we are motivated to continue with Godfreys success."

Chris lives in nearby Staplehurst with his wife and young son and spends what spare time he has with computers and golf.

We wish Chris and the team at Godfreys every success in their new positions.