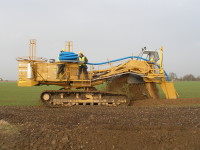 Mastenbroek has sold its first of a new generation of drainage trenchers, adding to an already impressive line-up from the European machinery manufacturer. The M3500 features a mechanically driven trencher chain, simplified controls and an all-new operator's cab designed to be ergonomically efficient.

The machine will make its public debut at Bauma, complete with GPS grade control for drainage trenchers. The latter was developed by Trimble with close cooperation from Mastenbroek. The system enables surveying through to as-laid plans.

The first M3500 was delivered to German drainage specialist Mors GmbH, in February. With a gross weight of 22 tonnes, the machine comes with a European tier three Cummins QSM 11 construction diesel engine delivering 350hp (260kW). Digging depth is up to 2.6m, with trench widths of between 160mm and 400mm.

The new machine is designed to cope with difficult terrain and comes with side slope levelling; additionally, it can be slewed for curved trenching applications. Undercarriage features independent hydrostatic track drive and 650mm wide triple grouser pads on oscillating tracks.

General manager Christopher Pett says the new machine was developed specifically in response to calls for a mechanically driven trenching chain and side slope operation. The German market has traditionally favoured such machines. "There are some key advantages using mechanical drive, as more engine power goes straight to the chain. It's comparatively more fuel efficient and delivers impressive productivity rates. Single joystick control means that setting-in is much quicker, which itself can lead to better productivity."