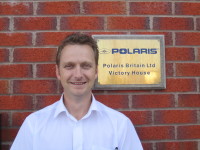 Following the promotion of Polaris's Lee Frankish as Sales & Marketing Manager on the Victory side of the business, the company has appointed Richard Heywood as Northern ORV District Sales Manager. Glasgow based, Richard brings a wealth of experience from his sixteen years in the groundcare machinery industry covering a similar geographic territory from Scotland through the North of England.

Richard says he is very excited by the prospect of working for Polaris and is looking forward to the challenge of building on the success gained in his previous role. He's confident he can make a major contribution in selling through the dealer network to help Polaris meet the targets in ORV sales. Richard is married with two children and in his leisure time enjoys running half marathons, small bore shooting and bee keeping. His starting date with Polaris is 3rd October 2011.