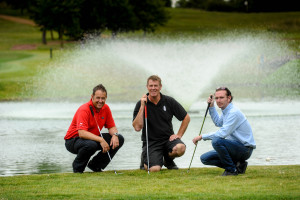 A new Otterbine 5HP aerating fountain formed part of the redevelopment plans for The Nottinghamshire Golf and Country Club, just six miles from Nottingham city centre in the East Midlands, when new owners took over two years ago.

The plans were put in place to take the club to the next level and included a new lake constructed next to the clubhouse to improve the appearance of the course. A water feature in the shape of an Otterbine Sunburst 5HP aerating fountain, which was installed by GlenFarrow, was added to the lake to create an attraction for guests and members.

Also part of improvements were the introduction of new tees to 12 of the 18 holes on the Open Course, plus the planting of strategically-placed trees and water features to enhance the golfing experience.

"The new owners wanted to raise the bar and, with a focus on weddings and functions, it was decided to add a 3,000 square metre lake with a fountain," says course manager Pete Billings. "I was familiar with the Otterbine brand and in my opinion they are the market leaders for fountains. I had a look at other brands, but this was such a big job I knew I had to go with the one I could rely on and I knew Otterbine would be the most successful for the job.

"We chose the Otterbine Sunburst mainly for aesthetic reasons. It fulfills the objective of making a big impression; the spray pattern is really attractive and looks beautiful at night with the lighting system on. That said I purposely chose a 5HP motor due to its ability to move 237 cubic metres of water per hour, which helps to ensure the lake remains clear and clean at the same time. It made sense to have a fountain that looks fantastic, but which serves a practical purpose, too. We've had it for a year, running pretty much constantly on a timer, and there's been no algae."

Otterbine has an aeration line of fountains, which, along with the Sunburst, also includes the Gemini and Saturn patterns. All have an open-throat design that allows them to move over three times more water than the decorative fountains and offer, says Otterbine, the best solution for an attractive display capable of managing extremely poor water quality.

Peter concludes: "Another major benefit is the long warranty Otterbine provides. Its five-years, which means I don't need to worry about anything. The Sunburst is a good tool and a great piece of kit, and is as popular with the club for its practical purposes as it is with members and guests for its attractiveness."