by Charmian Robson
in Rugby and Consultancy
on 26 Nov 2015

2015 marked a moment in history for Egremont Amateur rugby league football club (ARLFC). This was the year when they were finally able to officially open their new pitch at Gillfoot Park, near Whitehaven in Cumbria. 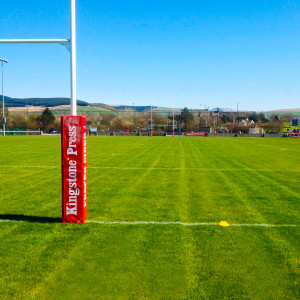 The pitch which had been over 18 months of hard work in the making hosted Egremont Rangers v East Leeds as its first official game in the Kingstone Press National Conference League Premier Division clash. Since then many more games have been played on the pitch that has changed the Clubs fortunes.

This amazing undertaking was the brainchild of Club Chairman and Secretary John Brocklebank, an ex-International Rugby League player and coach, and was implemented by Duncan Ross Ltd sports field construction and drainage contractor, led by Duncan himself. "This project is not just about today's games but provides a legacy for future generations" said John "and we are delighted to have worked with Duncan Ross to make it happen."

Like so many projects, Duncan likes to put his heart and soul into the job, but Egremont has been more than that - as the team have worked tirelessly with the club to deliver a first class pitch in extraordinarily difficult circumstances.

To start with the original pitch was shared with the local cricket club which created a certain conflict of interest in the summer when both cricket and rugby were vying for play. Boundaries had to be constantly removed and re-instated. The solution was to re-locate the game of rugby to its own site alongside the cricket pitch in order to help Egremont Rangers to thrive as a club and build on their success of qualifying in the top 12 of the National League.

The first issue that needed addressing on the site was 'how do we achieve a flat surface when the site is on a natural slope?' This was tackled by Tim Colclough from Tams who created the initial designs for the site which would later be implemented.

This is where Duncan Ross Ltd really demonstrated the extent of their abilities and wide scope of skills. The project was no longer just a pitch construction, but a piece of civil engineering - the site would have to be excavated, graded, drained, (sand) ameliorated, seeded and a retaining wall erected to protect the pitch from natural erosion and slippage.

Consultation and close liaison was required throughout the implementation of the scheme with architects, planning committees, consultants as well as the club officials in order to meet the aspirations and requirements of all.

Additionally, Duncan Ross Ltd agreed to design and build a spectator stand on what used to be a small training area alongside the new pitch, as well as stripping out soil, carrying out earth works, installing drainage infrastructure, cultivating and grading the tilth, importing sand and seedbed, fertilising, seeding, installing sand grooves and putting the rugby posts in place.

The project was finished with fencing and floodlighting to complete what would become a professional, functional and wholly enviable facility for Egremont Rugby Club to be immensely proud of.

"We won this tender on many levels of offering quality, knowledge, expertise and good price," explained Duncan "But more than that this club deserved something special. They have coped with some very challenging conditions to win huge recognition in their sport. I am delighted to have been instrumental in delivering them first class facilities to help them achieve even greater successes in the future."