Stewart Ward's appointment last year as Head Groundsman at Forest Green Rovers (FGRs) was the perfect choice. As a horticulturalist with a National Certificate and Diploma in horticulture and landscaping, five to seven years at Askan Bryan College where he switched to turf management and became involved with teaching degree courses in cricket, football and rugby before moving to Hartpury College to take charge of their new football pitches, Stewart shares the 'green' ethos of his chairman Dale Vince, (the boss of green electricity company Ecotricity) and has the experience and credentials to help turn FGRs' New Lawn ground into the entirely 'green' and sustainable enterprise that they both aspire to. The only problem when he first arrived was the state of the pitch.

"Aesthetically it didn't look too bad," he remembers "and as it was the start of the season I knew that we just had to get it through." By the end of November things had gone from bad to worse. "Basically by last year everything had collapsed," Stewart continues. "By the end of November the pitch had seriously deteriorated to the point where it was unacceptable. We had 30 tonnes of Mansfield sand at the side and we were putting 5 tonnes on the surface every week. After the snow the grass went. We got down to 30% coverage in the central areas."

Having worked with J Pugh-Lewis during his time at Hartpury College, Stewart contacted James, the company's director, who came down three times during last season. The two men poured over the plans of the original pitch construction and subsequent alterations, some of which had been carried out by Pugh-Lewis acting under the Club's former pitch consultants.

"Forest Green Rovers had moved from their old ground to the New Lawn in time for the 2006/7 season," James explains. "When first built the pitch had drains at 10m centres and sand slits at 2m centres, all connecting into a perimeter soakaway. Since then sandbands and additional sand slits had been added to try and improve the drainage, but there still appeared to be a problem. Once we started digging down to the drains we found that the pipes were silted up, which would indicate that they had been stood in water either through poor installation or because the soakaway wasn't working well." 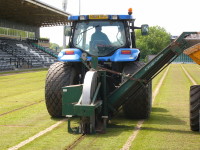 J Pugh-Lewis, who had unsuccessfully tendered for the original pitch construction, now found them selves submitting a plan for a whole new drainage system and pitch re-construction. Stewart talked to his new chairman, got the go-ahead and the company began work last May.

"The first step was to install main drains down each touchline to remove the soakaway from the equation; we then laid new pipe drains across the pitch at 6m centres," James continues. "After the pipes had gone in new sand slits were installed at 1m spacings and the whole system connected to a pump chamber so that Stewart can re-use the water for irrigation."

After drainage the pitch surface was removed with a Koro Fieldtopmaker, and top dressing applied. This was worked into the surface before the pitch was over-seeded with ryegrass by multiple passes of a disc seeder.

Stewart is delighted. "Everything drains into two main drains and flows into a single manhole chamber" he explains. "I can suck it out with a pump, filter it through past the meter and see exactly how much I've got. I can then decide whether it's going to be re-cycled for irrigation or pump it into the external drainage system."

By the end of September Stewart had calculated that only 10 cu metres of water had come off the pitch since June and his new grass had "thickened up a treat." But he knows that the coming season will be crucial. "From October onwards will be the real test," he says. Hopefully, now that the pitch has a fully comprehensive drainage system and a construction carried out to premier league standard, it will pass with flying colours.