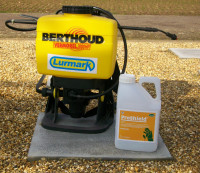 Scotts has launched a new pre-emergent herbicide that protects against regrowth on gravel and soft surfaces.

Applied post-emergence, ProShield is rainfast within one hour and gives rapid knockdown and kill to a broad range of problematic weed species whilst its barrier action prevents germination for up to six months.

It contains highly-effective, proven new chemistry and is fast acting because of the synergy of its two potent actives, Glyphosate and Diflufenican (DFF), which have complementary modes of action. Diflufenican is extremely hydrophobic. It adheres to the surface and forms a skin or 'barrier' that protects against germination.

Because it's hydrophobic it stays in place, preventing weed germination. Glyphosate is taken up through the foliage and translocated throughout the plant. Its post-emergency activity kills seedlings and established weeds. The effects of ProShield on broad-leaved perennials can be seen 8-10 days after application, compared to 14-21 days with Glyphosate only.

ProShield has an ultra-low dose rate of 4.5 litres per hectare and it's water-based, non-solvent formulation is classed as Non-Hazard and Non-Irritant to the operator under Chip 3 and COSHH regulations. It is best applied between March and September and is ideal for use in industrial areas, along fence lines, around street furniture and signage, beneath pylons, along road edges, for ringing mature street trees and on open soil areas. With targeted spot treatment, it can also be applied in nurseries and around shrub beds.