Golf course and grounds maintenance managers not convinced that a small agricultural tractor is the best option for their needs no longer have to compromise on power and features. With the new McCormick GX55 and GXH55 tractors spanning the gap between

The fourth model added to McCormick's GX-GXH line-up has 54hp at its disposal thanks to a high-spec version of the 2-litre Yanmar four-cylinder diesel engine. Turbocharging and a multi-valve cylinder head help it develop high power and torque outputs.

Four-wheel drive is standard, complete with electro-hydraulic diff locks (rather than limited slip differentials) in both axles for maximum traction. Alternatively, buyers can choose to have just two-wheel drive with the gearbox version, which has 16 gears in both directions, including creep ratios for implements needing very slow speeds, and a synchro forward-reverse shuttle.

The GXH55 comes with three-range hydrostatic drive complete with a 'constant speed' control feature for easier driving. "This model is firmly at the top-end of the compact sector," emphasises John Percy. "It's not a cheap-and-cheerful machine but one built with a full specification and the strength to cope with an arduous workload." As an example, he highlights the transmission casing manufactured in cast iron rather than aluminium to ensure it can handle the high power and torque of the Yanmar engine.

The newcomer is similar in layout and styling to the 37hp, 44hp and 49hp GX / GXH models that are already proving popular with groundcare operators. Like these, it can be equipped with one of McCormick's new mid-mounted mowing decks - available in 1.75m and 1.8m sizes - as well as a selection of front- or rear-mounted mowers and other groundcare implements. A rollover protection frame is standard but McCormick also produces a safety weather cab to give drivers a more comfortable working environment. 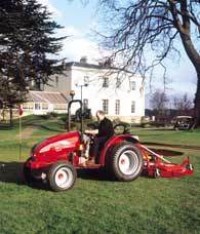 "So far, we've tended to concentrate on tractors for professional users of grounds maintenance equipment," says John Percy of McCormick's compact equipment team. "The new 'GM' models have a professional specification but are of a size and price that should appeal to a wider audience."

Horticultural enterprises with polytunnels, fruit growers, business premises, private houses with large gardens or rough grass areas to maintain, as well as stables and smallholdings, are all candidates for the new tractors, which can be fitted with traction or turf tyres. "They are built and styled along the lines of the bigger and better equipped McCormick GX tractors but the newcomers are a little shorter, narrower and lighter," explains Mr Percy. "That makes them especially handy for work in confined locations."

The 'GM' tractors have the same power outputs from advanced three- and four-cylinder Yanmar engines as their bigger cousins. The McCormick GM40 has 37.5hp from its three-cylinder engine; the McCormick GM45 and GM50 have four-cylinder motors developing 44hp and 49.5hp. The range-topping GM55 has a new four-cylinder turbo engine with twin inlet and exhaust valves contributing to its 54hp output.

All four models come with four-wheel drive and a creep gearbox with 16 speeds in forward and reverse, including very low ratios for specialist work. Implements carried on the 1200kg capacity rear three-point linkage can be driven by the tractor's independent power take-off system, which provides 540rpm at two different engine speeds - one for full power, the other for greater fuel economy and lower operator and bystander noise levels.

A third alternative is the ground driven pto, which links forward speed to application rate when using certain trailed top-dressing spreaders. McCormick GM tractor drivers will find an uncluttered workplace, despite the compact nature of the machines, with gear selectors arranged both sides of the steering column shroud where they are easily reached without impeding access to and from the seat.