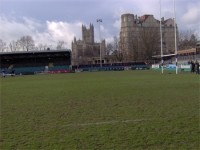 A pressure group set up to back the idea of a new sports stadium at The Rec has signed up more than 600 members in just a few days.

Two keen sports stalwarts have launched The Real Friends of the Rec as Bath Rugby weighs up whether its future lies at its historic home.

Since launching the group at the weekend, veteran fundraiser Peter Downey and rugby fan Richard Wright have already signed up more than 600 members on the group's website - www.realfriendsoftherec.co.uk.

Its title cocks a snook at the existing Friends of the Bath Recreation Ground group set up by people living around the site to stop expansion by the rugby club.

Mr Downey, who spearheaded the drive to raise £1.6 million for what is now the Hamptons Stand in 1996, has had initial talks with a range of sports organisations - including baseball officials in the USA.

The duo met rugby club chief executive Bob Calleja yesterday afternoon and have asked for a meeting with Cllr Chris Watt, who chairs the trustees who currently administer The Rec.

The trustees are finalising a document setting out a new future for The Rec, which was given to the city under covenant in 1956.

Their blueprint outlining how a bigger stadium could be accommodated will need approval from the Charity Commission, which since a High Court ruling in 2002 has overseen the land's use.

Former city councillor Mr Downey says it is vital that people show their support for the idea of using The Rec as a major sporting venue by signing up on the group's website.

He says there could be scope for rugby, cricket, hockey, rugby league, baseball and even American football to be played on the green lung.

"We have a vision for the city, for the site, and for sport," he said.

He said Bath was known throughout the world for its rugby tradition - with The Rec offering a world-class setting.

"I defy you to find anywhere else in the world for watching sport better than the top of the Hamptons Stand."

The group has no intention of getting into a slanging match with the existing residents' organisation led by Worthy Gilson.

Mr Downey said only: "The only sympathy I had with them was when they said The Rec shouldn't just be about rugby. We agree with that."

Mr Gilson has consistently refused to reveal how many members his group has, or publish a constitution.

Yesterday he refused to comment to The Bath Chronicle about the new group.

Mr Downey said his group would have a clear constitution and have a general meeting to appoint officers.

The pair are keen to harness the backing of businesses for the rugby club's continued presence in the heart of the city.

They estimate that the club brings in nearly £20 million a year to the city's economy and are keen to show the club's owner Andrew Brownsword that there is a groundswell of support from residents and traders alike.

They have pointed to the 22,000-signature petition backing the club's presence at The Rec organised by fans with the backing of The Bath Chronicle last year.

The group's aims are: "To help secure the support of the citizens of and visitors to Bath for the development of and improvements to the Recreation Ground which will meet the needs of sporting and other users and ensure the financial support of commercial interests, including the Bath Rugby Club. To encourage the trustees of the Bath Recreation Ground to consider the best interests of The Rec, in particular its long-term financial viability."

"It will register the strength of feeling in support of sport on The Rec.

"They're generally trying to make people aware of the need to have a thriving Rec.

"They're an independent group but any positive lobbying has to be an advantage."

The club says its first preference as it seeks to develop a stadium with a 15,000 capacity remains The Rec.

But Mr Calleja has ordered a feasibility study looking at options for developing its 10-acre Lambridge training site, and says he is also exploring sites at Keynsham and Corsham.

He has also talked to football club Swindon Town about a possible groundshare while any development gets under way.

In the mean time, the trustees are conducting parallel negotiations with the commission over a possible two-year extension to the club's lease for its temporary stand.

This could give the club breathing space in the current credit crunch to raise the finance for its stadium development.

Cllr Watt said he was happy to meet Mr Downey.

"As long as the Real Friends group - along with everyone else - recognises that everything has to be in accordance with charity law and the charitable aspect of The Rec, and they want to work with the trustees, then their existence is to be welcomed."