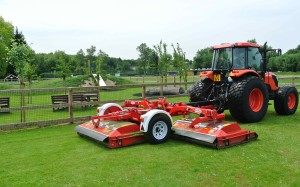 The Grounds Maintenance Department at Hertfordshire's Three Rivers District Council, based at Rickmansworth, has 18 recreational parks to keep in trim and this includes 25 football pitches.

It is a massive mowing routine for Supervisor Howard Ringland and one that has to be rigidly maintained throughout the growing season.

Ahead of this year's, the Department bought a second Trimax Pegasus trailed rotary mower - this one a Series 3 model - from groundscare machinery dealer George Brown's Chesham branch.

Its older machine continues in full operation, but on the rougher, less used public spaces in the area.

The picture shows Grounds Maintenance Engineer Ben Bloomfield doing a mid-summer trim of the Scotsbridge Playing Fields on the outskirts of Rickmansworth with the new mower.

It is an hour and 40-minute task all told, one of many on his cutting cycle.

The turf is particularly fast growing here, being close to the River Chess, one of the Three Rivers that give the council its name (the others being the Gade and Colne).

Ben has to cut the Scotsbridge Playing Fields grass every eight days, usually to a height of 27mm.

The machine, with its 4.93 cutting width, leaves a pleasing striped effect and is easy to manoeuvre close to the perimeter of tight sections like the children's play area from the cab of the 85hp tractor.

Jobs like this, before the switch to rotary cutting, had to be done by 7-gang cylinder mower, but as Howard explained, plenty used to go wrong and it was hard to keep to a decent schedule.

A way had to be found to keep the grass - and budgets - in trim.

"We have molehills aplenty, plus stones and all the sort of unwanted, hidden debris you get in public places," he said. "Cutting the grass is often far from straightforward and the gang blades were always at risk."

"Whatever conditions you throw at this mower, it can handle it.My job - and Ben's - is so much easier these days."

After each 8-10 day run of cutting Ben will routinely check the Pegasus blades, and sharpen if necessary.

He needs no special skill to do this and the mower is hardly out of action.

"I can also do any belt or blade changing myself and can be back cutting in the hour," said Ben. "In the old days with the gang, the whole spaghetti of hydraulic piping meant it was a workshop job every time something went wrong - and it did, quite a lot."