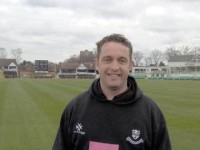 The combination of this winter,s mild weather and the fact that we have had no flooding at the ground this year has certainly helped improve our sward quality on both the square and outfield. This is only the fourth time in the last 20 years that the ground has not flooded.

Most years we have to cope with annual flooding that completely covers the whole site with over 5ft depth of floodwater water engulfing the square and outfield. Even our practice net areas suffer flood damage.

The consequence of these floods does without doubt influence the sward quality at the ground. We usually get flooding either in November / December or later on in February.

Floodings in November actually cause more damage as the sward is still recovering from end of season renovations. The flooding not only washes away seed or young growth but can kill off the grass, especially when the flood remains on the ground longer than 7 days.

We can lose up to between 40-60% of grass cover during these floods. However if we get a flood in February the damage can be somewhat reduced. Due to the fact, the sward has had longer to recover and mature.

These floods initiate a lot of work, as we have to prepare every year for the potential threat of flooding. This involves removing all furniture and equipment that can be damaged from the floodwater levels. We move a majority of our machines away from the ground during the winter period or store in a place were we have no flooding. Once the floods have abated we are then able to return all the furnishings and equipment back ready for the new season.

Clearing up after floods requires a lot of hard work, it is important that we distribute the silts and ensure they flow off the square as the water subsides. This involves getting a drag mat and dragging it under water to stir up the silts enabling them to float away with the abating water flow.

We then brush / sweep the square to remove any deposited silt materials. We also, as part of our end of season maintenance operations for the last two years, fraised mowed our square. This has not only enabled us to re-level and clean the square up but allowed us the opportunity to remove any residual silt that may be left after flooding. Last September we fraised of 13mm of debris and the year before we removed 25mm whilst at the same time re-levelled the square.

Due to the size of the outfield we can only implement a vigorous brushing and dragmatting and harrowing to re distribute any silt left on the outfield.

Once the flood water has resided, we often get as much as 75mm depth of silt debris left on some areas of the ground. It can take up to a week to clean this debris away.

I always keep a careful eye on the sward after any flood, particularly as there may have been some toxic material brought onto the ground. I usually have a soil analysis done. This helps identify any nutrient deficiences and at the same time can identify if we have any toxic problems. Of the 15 first class wickets three of these are kept for the TV matches and are generally sited in the middle of the square. We invariably have more than 80 matches to prepare for each season. I try to get between 2-3 games per wicket. However, weather and wear will often dictate what I can re-use and where.

I have already begun preparing the seven pre season wickets, reducing the height of cut and initiated some rolling with our Allett mowers. I need to get these up and running for when our players come back on the 21st of March.

We have about four weeks until our first match on the 27th April to prepare and get the square ready for play.

We start our rolling programme using the 42 inch Allett mower rolling in four directions to begin the hardening and moisture relieving process. I usually can tell and guage the amount of rolling required by inserting a knife into the soil and feeling how hard and what resistence we have in our soil profile. Depending on the weather and the condition of soil we will then increase the weight and amount of rolling we require to get the wickets ready for pre season match practice.

We have been using GOSTD Supernatural Loam (32% clay content) for the last ten years. Roy Mclaren chose to change the soil because he felt that the Banbury loam we were using went very slimey after a flood. We have been very pleased with the results and have managed to produce very consistent wickets using this material.

I have two watering points for the square, mains pressure is very good allowing me to use either flat hose or hand held sprinkler systems for watering the square.

Mowing heights for the cricket square are:-

Our wicket preparations start 14 days prior to the match:

After match wicket repairs begin with the brushing and sweeping up of any surface debris, soaking the wicket, scarifying with our Graden, spike, top dress and overseed. Additional work may be required to repair foot hole damage. We try to get 2-3 matches out of all our one day wickets. 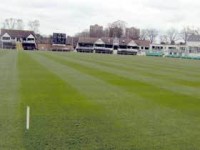 Using the triple enables us to cut the whole outfield in less than an hour compared to taking up to three hours using our Allett mowers. However, we still utilise our Allets for the more prestigious matches.

I contract out all weeding killing for the outfield, it saves a lot of time and it means I do not have to worry about it so much and can concentrate on the more important task of wicket preparations.

I generally use a slow release fertiliser product for the outfield and will be applying something like a 25:5:15 in about three weeks time 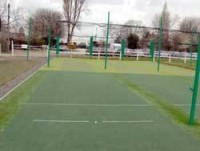 Mark Wakefield treats all the grass bay areas in the same manner as our square. Mowing and wicket preparations are identical, we try and simulate and replicate the work we carry out on the square.

The artificial nets areas are fairly new. We generally have to replace the surface after three years due to the heavy wear they get from play. The system consists of a fully engineered tarmacadam subbase with shockpads overlaid with the playing surface materials. The bowlers' run up is a sand filled carpet system whereas the batting crease is a non-filled carpet.

We have to regularly clean these areas, we use a pressure washer particularly after the floods to remove debris. 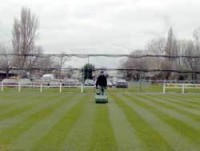 I have a reasonable range of equipment that we have managed to build up over a number of years, we have recently acquired a new Super Blotter to help remove any unwanted surface water, and I am looking to replace some of my older mowing machines at the end of the playing season.

My autumn renovation are no different to many grounds in that we try to put the square to bed as quickly as possible to make good use of soil and air temperatures in September. 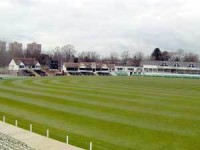