by Louise Prettyman
in Industry News
on 29 Apr 2014 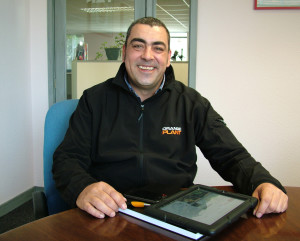 In addition to managing the Burgess Hill and Peterborough depots Orange Plants' MD, Joanna Chapman, sees his appointment as key to the company's contact with local councils to ensure Orange Plant is well positioned for tendering opportunities.

"I also believe", she said, "that Andrew is ideal to establish the export side of Orange Plant's business with Carlton Stump Grinders where we are their European partner."

Orange Plant was established in 2001 by tree surgeons. They saw the potential in the market for a company that knew the chipper equipment inside and out.

Ten years on, the company added Shredders, Stump Grinders and Wood Processors to their portfolio. That portfolio was given a significant boost when Orange Plant became an authorised dealer for GreenMech, the UK's leading manufacturer of wood chippers and shredders.

It is this product line that sees the most potential in the short and long term hire market as well as outright sales.

Seven depots currently cover the country from Glasgow in the north to Burgess Hill in the south. Both of the depots under Andrew's wing measure about 3,500sq feet where hire machines can be collected or delivered.

Every depot has experienced staff to give advice on the best machine to hire or buy - new or used. The company has ambitious plans to open more depots in the coming years.

Prior to joining Orange Plant Andrew (Pav to his mates) spent 24 years in the military, most recently as part of the Royal Army Medical Corp's, involved with transporting supplies and assisting in the functioning of mobile operating theatres.

His last deployment was Afghanistan, where he sustained injuries to his spine and hearing resulting in him being formally discharged in February 2013. He then moved on to be Team Manager for Race2Recovery.

When Gordon Chapman, Joanna's father, was alive he was keen on motor racing and had purchased a QT Wildcat rally car, but had never got to use it due to personal health problems.

The Chapman family donated the car to the Race2Recovery Charity, who give opportunities to injured Army personnel. "Pav" and his team then went onto compete in both the 2013 and 2014 Dakar Rally using the QT Wildcat.