Warton Cricket Club is situated right on the boundary between Cumbria and Lancashire and play in the Westmorland Cricket League.

We have always been committed to producing the best possible batting pitches we can achieve. I am the unpaid groundsman and have been looking after the square for four years now. I have gradually increased my knowledge and improved my skills by attending courses and taking advice from professional people within the industry.

On our old square we used Mendip loam and, through overseeding, we were working towards having a 100% rye grass sward. Why then even consider constructing a new square?

The ground is situated alongside the main Euston to Glasgow rail line. There was only a 42 yard boundary resulting in the ball being hit onto the line several times each game. This had gone on for many years. However, with the trains becoming ever faster and quieter, the dangers associated with retrieving the ball were becoming unacceptable. The only answer was to approach the local landowner and try to obtain extra land to increase the size of our ground, thus enabling us to move the square further away from the rail line. Being a persuasive type of person, I managed to get him to not only let us use an extra 20 yards opposite the rail line but also an extra 10 yards at a right angle to this, enabling us to increase the size of the square from 9 pitches to 12. He gave us a 25 year lease at £70 per year, instructing us never to pay it, but also making it clear that he didn't expect to have to pay for a pint if he called in to watch a match!

Three quotations were obtained from contractors to undertake the job and we decided to use Terry Charlton, whose company Turfcare Limited came highly recommended. While all this was going on, we were applying to various organisations for funding. We were successful in obtaining grants of £15,000 from DEFRA, £1,000 from the ECB, £1,500 from the Parish Council and £1,000 from another local funding organisation. This covered the cost of the work.

All this planning took approximately 12 months. We asked the Westmorland League not to allocate any cricket at our ground after August 2004 and Turfcare were booked to start the work 1st September. On the 2nd September, after a day's work with a digger, I regretted ever starting. The place looked like a bomb site and I wondered if we'd ever play cricket on it again.

The previous square had a considerable slope across the width of the pitches. I was never happy with this and I was determined to eradicate as much of this as possible. This would mean the work taking longer and would be technically more difficult for the contractor. Terry and several of our Committee members argued that we should follow the existing contours, however I was determined to stick by my guns. I knew we only had one chance at this and, eventually, I got their support. It was agreed that we would remove 50% of the gradient. This meant that, when completed, the bottom end of the square would have an 8" ledge where it joined the outfield. We had to buy 100 tons of topsoil to grade this out. Further topsoil will be brought in over the years to improve it.

At this point I must point out that the contractor and several professional and amateur groundsmen told me there would be no bounce the following season, the ball would simply pitch and roll. I listened to what they said but never once accepted it. I was determined to do everything I possibly could to ensure that we not only had good bounce but also good pace the following season.

Initially, germination was patchy due to an extended dry period. This meant I had to do a lot of watering, which never has the same effect as natural rain. However, as time went by, it evened up and, after about a month, there was sufficient growth to enable me to cut it with the cylinder mower set at its maximum height. For the first two or three mowings, I didn't manage to take too much off as the grass was very soft and the front roller tended to lay it down. However, this improved with each mowing.

During the second week in October, I took a chance and applied 35 kilos of Growmore, hoping the frosts would be late. I was lucky. Throughout the winter I topped the grass as often as possible when the weather allowed with the cylinder mower set at 1". I was determined to achieve as much tillering as possible.

The third week in February, I applied autumn and winter fertilizer and started rolling with the 5cwt roller and sarrelled the entire square three times at fortnightly intervals. In the middle of the second week of March, I rolled for the first time with our one ton diesel roller, but then we had a cold spell and I couldn't do any more rolling for 2½ weeks. Rolling recommenced in April with the roller ballasted up to 1½ tons. By now the square was starting to look and feel good. The second week in April, I applied 40 kilos of spring and summer fertilizer and during the third week, I applied weedkiller. With hindsight I probably should have waited a bit longer.

We approached the League asking them not to allocate any cricket to our ground until the 1st May. This gave us an extra week and I really feel this helped. By then, the square felt fully consolidated and had a really dense covering of ryegrass. I knew I was in with a chance.

As normal, I started preparing the first pitch 12 days prior to the game, gradually reducing the height of cut, raking, brushing and rolling until, by match day, the pitch was cut at 3mm and looked fantastic. It was as hard as concrete, I have never seen a harder pitch in this area and had a nice even coverage of grass. It looked fantastic, a white pitch in the middle of a lush green square. But how would it play?

I had bounced the odd ball on it, and I must admit I was concerned as I sat nervously on the boundary waiting for the game to commence. I am pleased to say that the bounce and pace were superb, far better than the old Mendip pitches. Stump high off a length and consistent, which is what I always try to achieve. 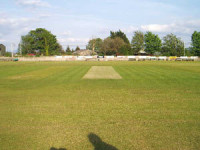 We have the County Under 15's twice this year for a one day match and the Under 17's in August for a two day match. I am now confident that we can provide them with the high quality pitches that the standard of their game demands.

Warton Cricket Club are very happy with the quality of the work carried out by Terry Charlton's company and Terry has always been available via telephone if I have needed any advice or information regarding the aftercare of the project.

My advice to any club considering undertaking a similar project - don't rush into it, plan it thoroughly, be prepared to undertake a considerable amount of hard work, and don't take any notice of anybody who tells you that it is impossible to have good pitches the following season.