When I put in a call to Phil White, Stadium Manager at St Helens Rugby League Football Club, to arrange a visit to see how their new stadium was progressing, I was told that I would need to wear a safety hat, hi vis jacket and safety boots to be allowed into the construction site.

It's always good to see new venues and catch up with the guys who are tasked with maintaining these facilities. Phil has been Stadium Manager for seven years, but admits he knows very little about maintaining pitches; he relies on the skills and knowledge of his Head Groundsman, John Edwards, who has been at the club for over twenty-five years, However, John's experience has been gained solely on the soil based pitch at their old Knowsley Road Ground, so the new fibresand pitch, installed by Souters Sports Ltd., looks like being a steep learning curve for him.

Fortunately, he will be able to call on the experience of the Souters staff, Keith Porter, Head Groundsman at Leigh Sports Village, and PSD Agronomy, the company charged with overseeing the pitch build, so his path should be smoothed somewhat.

The new stadium was funded by planning gains that enabled Tesco and other large retailers to develop the old United Glass site, along with the club's neighbouring Knowsley Road stadium. The new stadium befits a succesful club like St Helens, and the increased capacity should generate much needed additional income. .
Scottish building contractors, Barr Construction Ltd., well known for their work at Southampton, Fulham, Rangers and Celtic amongst others, were awarded the contract to build the new stadium, and commenced work in July 2010.

For the 2011 season, St Helens played their 'home' matches at the Stobart Stadium Halton, home of Widnes Vikings RLFC and Everton FC Reserves.
The decision to install a fibresand pitch was to ensure that fewer games are cancelled due to inclement weather. The new surface is designed to cope with well over 25mm of rainfall per hour. Work began on its construction in May of this year.

The profile of the pitch comprises the installation of pipe drains at 6m centres into the subsoil formation level. This is then covered with a geotextile membrane.
Above the membrane sits a 100mm gravel raft of clean grit, which is covered with 200mm of lower rootzone materials. A further 70mm of sand is placed on top of this layer, into which a further 30mm of fibresand is incorporated.

The inclusion of fibre into the upper rootzone is aimed at maintaining stability when grass cover thins or has been lost. Stability will be aided by maintaining a moist rootzone condition.

This is achieved by having access to a fully automated irrigation system that has been installed into the new pitch, which will be run daily, dependant on weather.
On the day of my visit, wearing the required H&S gear obviously, John, along with Mark Higgs (Souters Project Manager) and Keith Porter, were cutting the pitch with Dennis G860 cylinder mowers.

With the pitch build now completed, the aim is to improve the quality of the sward in readiness for the first trials and practice matches in January, and the first official fixture in February 2012.

As for equipment, Phil and John are currently putting a wish list together to obtain the necessary machinery required for maintaining the new pitch. The club does have some old kit - a Ransomes Mastiff and line marking equipment - but it is clear that machinery needs to be purchased to ensure that the fibresand pitch is maintained correctly.

Top of the list are two new 36" pedestrian cylinder mowers; a Ransomes Mastiff, Dennis G860, Allett Regal or similar. A ride-on triple mower, a compact tractor capable of operating a range of equipment, a tractor mounted solid tine spiker with a range of solid and hollow tines, pedestrian rotary mowers for cleaning up, a tractor mounted or self propelled sprayer and a topdresser complete the wish list.

In addition to the spend on new machinery, Phil is also concerned about the level of inputs that are required to maintain the pitch in terms of fertilisers, seed and fungicides. He has researched that clubs with similar hi-spec pitches are spending in excess of £25,000 per year on those materials alone. The whole package will be far more financially demanding than the maintenance of the old soil based pitch, and it is something the club's management will have to embrace, or suffer the consequences.

One cannot help but wonder why these additional costs were not considered when the new stadium was being planned!

It is going to be an interesting time at St Helens in the coming year. There will be great expectations from all parties to see the club do well at their new home. Spare a thought for John who, without doubt, will have the toughest job getting to know the new pitch and its maintenance requirements. I just hope that the club's management are prepared to invest to ensure that he has the tools and resources he needs.
Souters Sports began the pitch build in early May. Here is a brief diary of the work undertaken

26th May 2011 - Lay Terram lining over sub base of pitch and cover with 100mm depth 2-6mm gravel carpet. Drainage complete. 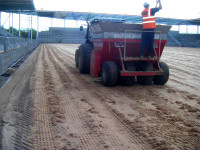 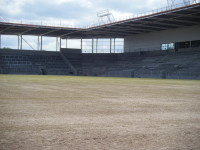