by External source
in Industry News
on 02 Feb 2013 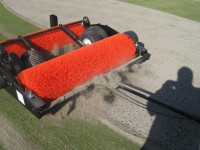 The latest version of the original and unique Sweep N Fill brush was due to make its UK debut at BTME 2013.

However, the snowy conditions that prevailed just prior to the show delayed the container vessel and unloading, leaving the new Sweep N Fill III stranded at a Felixstowe dockside during the show. At a BTME press briefing JSM Distribution went ahead and announced the new model launch. 'While it is disappointing not to have had the product on our stand, the new model is so close to release that BTME was still the perfect forum for announcing it to the golf industry and our dealers', said David Cole. 'And being an enhancement of the existing product we were displaying, we still were able to take our first orders during the show.'

Originally designed, developed and patented by Golf Course Superintendent, John Heitfield, the SNF III builds on the legacy of the original with enhancements to make it even more user friendly and convenient. These include a narrower transport width, higher & faster transport lift with more ground clearance and a fully enclosed drive mechanism which allows for adjustment without removal of the protective covers.

The ground driven brushes can be towed by a golf cart, bunker bike or any small utility vehicle. The brush action mimics a 'push-broom' action - gently flicking the plant leaves upright while moving sand and topdressing into aeration holes and the crown of the plant. The unique bristle blend and softness took time to perfect, ensuring it was stiff enough to work, but kind to the plant. It also renovates artificial turf, including 3G surfaces. UK user testimonials for the SNF include:

'Having been told about the SNF by existing users we arranged a demonstration while visiting BTME last year. The demo immediately proved the point as to how effective this brush is. It has transformed a laborious task' - Jim McKenzie MBE, Celtic Manor Resort 'I can honestly say that this brush is probably the most impressive piece of equipment I have encountered in my entire career. It has turned an unusually difficult task into a fairly simple one' - Cameron McMillan, The Queenwood Golf Club