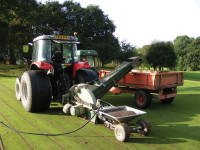 There is evidence everywhere in the UK that the numbers of golfers seeking to join a club falls far short of the places available. It is putting numerous clubs in a serious financial position.

The widespread answer to this situation has been to abolish club joining fees, but this has turned out to be a double-edged sword. Initially, it persuaded some 'ditherers' to join a club and, in the majority of cases, they found the club environment to their liking.

But, abolishing joining fees enables golfers to move more easily from one club to another. If winter rains lead to the closing of greens and fairways, the disgruntled members nowadays look elsewhere. They quietly move on, often persuading their playing partners to do likewise.

It leads to competition between golf clubs to recruit and retain the golfers in their locality.

Money is tight and the era of big expenditure on clubhouse facilities appears to be over. Increasingly, attention is being paid to the course - its maintenance, its improvement and, in some cases its redesign. Each consumes precious financial resources, so in-depth deliberations are essential before formulating a plan of action.

West Bradford Golf Club is a good example; it was established over 100 years ago. Its gently rolling fairways - some of which look towards Ilkley Moor - are scenically delightful. But, as Captain Craig Shaw said, "the need to improve the course was essential to maintain our reputation as an excellent golfing venue and to encourage new members of all ages."

He continued, "in recent years the club had overlooked some renovation work on the greens and this had led to a slow deterioration of the putting surface. We underestimated the impact a lack of mechanical operations would have and took steps to improve the overall quality of the course".

The club sought a new, well-qualified and experienced Head Greenkeeper, Robert Cleisham, who took up the post in January 2010. They gave him all the financial resources it could afford "to move the club forward". Machinery acquisitions and a fresh approach to the presentation went down well with the membership, and attracted more members to the club" said Craig Shaw.

Robert identified greens that had underlying drainage issues. With his previous employer - The Brammall Park Golf Club in Stockport, Lancs - he had been involved with improving the drainage of long established greens. This knowledge was invaluable when it came to selecting a system that his budget allowed.
Together with Ed Gilbert, in charge of contracting at Shelton Sportsturf Drainage Solutions, he drew up plans for the drainage of six greens. He favoured using the recently introduced 25mm (1'') perforated land drainage pipe installed at a depth of 300mm (12'')

These pipes would be installed in trenches narrower than a golf ball, spaced 500mm (20'') apart. Each would be backfilled with Lytag which would hasten the passage of soil water to the pipes. Each drainage run would be topped off with a free-draining sand. The club approved his proposals and the work was scheduled for October 2010.

To save money, the micro drainage was undertaken on a partnership basis with Sheltons who provided their System 25TM tractor mounted trenching machine with pipe laying attachment and vibrating gravel hopper. They also supplied the materials and skilled operator. The club supplied a back-up team of four men, who worked long days to ensure the work was completed within a week and with minimal disturbance.

Commenting on the outcome Craig said, "The drainage is already showing fantastic results with rapid water removal in such a short space of time. We now have six excellent golf greens that will be usable even after prolonged heavy rain for many years to come."