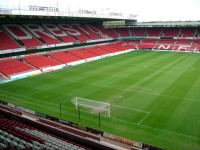 In the last few months Nottingham Forest have turned their fortunes around quite dramatically on the pitch, in more ways than one. Since the departure of Manager Gary Megson in February the caretaker management team of Frank Barlow and Ian McParland have transformed results with a run of Eight wins and two draws, putting the club in with a fighting chance to finish in the play offs. 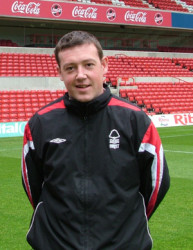 This success has been mirrored by the pitch itself. The ground has received a Highly Commended award in the Professional Football Groundsman of the Year Awards 2005/2006.

This is particularly satisfying for the new grounds team at the club, led by Ewan Hunter, who took up his position last October having to follow in the footsteps of Steve Welch, the new Head Groundsman at Wembley.

Ewan, aged 27, had to settle in very quickly, taking charge not only of the stadium but also the academy and training grounds. His previous position was with Rushden and Diamonds FC where, like Forest, they have a fibre sand pitch.

This has been a tough year for maintaining pitches, with prolonged cold temperatures, however Ewan is pleased with the fact that they still have over 90% grass left on the City Ground.

The stadium pitch has an automated pop up watering system, an essential tool for fibre sand pitches. If allowed to dry out the surface can become unstable and quickly lose grass cover. Ewan applies water to the pitch delivering two cycles of water varying the time the pop ups are activated, generally between 6-10 minutes depending on ground conditions to ensure the water gets deep down into the sand fibre profile, ensuring the roots are well watered and thus keeping the pitch stable.

Including Ewan there is a team of five. He and his assistant, Matt Tietjen work mainly on the stadium pitch, and the other three staff share duties at both the training and academy pitches. However, Ewan ensures that they all get the opportunity to work on the stadium pitch in some capacity. Also, on match days, they are all called in to work on the pitch, mainly to brush and divot afterwards.

It is a very young team, and all of them have or are attending college to obtain qualifications in sports turf management. Staff - Matt Teitjen 23, Craig Sharpe 26, Craig Watson 23 and Chris Moody 19.

Ewan has made changes to the maintenance regimes as he has his own ideas and feels that every groundsman has their own methods and ways of doing things and likes to put his own mark onto the pitch. Although Ewan has the final say in what happens Ewan encourages his staff to think for themselves and offer their opinions. He has bought two spray jet line markers which are used at the training and academy grounds. Previously they were using powdered paint, marking with wheel to wheel markers on a daily basis. The change to a liquid spray jet system has improved the line quality and reduced the need to mark out daily, with line marking completed on a weekly cycle or as required. This has freed up many hours, allowing the staff to get on with more important work, such as divoting, repairing and preparing pitches.

Ewan likes the new line marking system because there is no pre mixing of paints, the machine calibrates the mix with the turn of a switch. A choice of mix ratios are set on the machine, for initial marking he sets the machine to a 5.1 mix and for over marking he sets it to a 8.1 ratio. 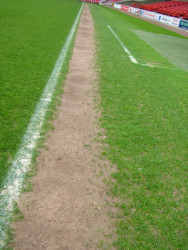 The stadium pitch has stood up well this season despite all the bad weather and a heavy fixture list, with over 25 first team, 7 reserve 3 youth team games and 14 training sessions. As for the remainder of the season it will depend on whether the team gets into the play offs, which will mean an additional fixtures plus the usual end of season school and local club cup finals.

End of season renovations are due to begin on May 22. Hewitts are booked to come in and Koro the entire pitch, removing all the surface vegetation, remixing the existing fibre sand profile and re levelling. This will be followed by some vertidraining to decompact the surface and finally overseeding with a MM60 seed mix and fertilising with 10:15:10.

Some of the repair work to the goalmouth areas and linesman runs, they will undertake themselves. This will involve hand forking, introducing some additional concentrated fibre material to restore levels and overseeding. Germination will be accelerated by the use of germination sheets, with the aim of getting these areas germinated within 7-10 days.

Grass height was kept at 29 mm during the winter and reduced to 27 in March. By the end of April it will be down to 25mm. Ransomes 36" Mastiffs are used to mow the pitch (all clippings are collected) and Dennis Cassette mowers fitted with verticutting and brushes units to help keep the sward open and groomed.

His fertiliser programme began last October when he applied a 3:0:3 plus 4% iron, followed by a regular application of 5:5:10 throughout the winter. Now that temperatures have risen sufficiently Ewan has just applied a 14:2:7 NPK fertiliser to get things moving.

The typical weekly maintenance regime between matches is fairly straightforward, with the aim to keep the sward clean, brushed, mowed and marked out:

The Academy ground has 6 pitches and the training ground three; all are fibre sand constructed. There are also two 3rd generation desso pithces one full size outdoor and one 60 by 40 yard indoor which need regular grooming and maintenance. 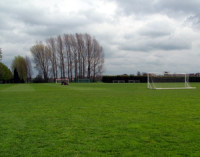 The maintenance regimes of cutting, mowing, aeration and feeding are virtually identical to the stadium pitch. However, instead of cutting with box mowers, the staff use ride on Toro triples with the boxes left off.

End of season renovations this year will again be completed by Hewitts but instead of Koroing the pitches they will be scarified in two directions, top dressed verti drained overseeded with MM60 seed and fertilised with 10:15:10.

Two pesticide products, using cardbendazim and Chlorpyrifos as active ingredients, have been applied to eradicate both a worm and leather jacket problem found at the training ground. Both applications were successful.

With his first season in charge nearly complete Ewan has been very pleased with the way the club and staff have treated him. Nottingham Forest is a big club and deserves to be back in the premiership. The future looks bright on both the playing and grounds side.

Ewan said, "My staff have been fantastic and very supportive since I arrived. They are all very dedicated and committed to producing quality playing surfaces here at the City Ground and the other venues".

Having spent a morning talking to Ewan and his staff I am confident that the club facilities are in good hands and that the role and profile of the groundstaff will be raised during his time at the club.

Another point of interest is the fact that, in Nottingham, there are three major sporting facilities within a mile of one another. Ewan is keen to meet up with both Greg Smith at Notts County and Steve Birks at Trent Bridge in the near future. There is a lot to be gained from learning and helping one another.