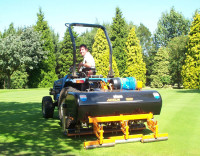 Even in the middle of the July heat-wave, on a day when temperatures soared to 32oC, The Robin Hood Golf Club, in Warwickshire was looking good - particularly the greens.

Head Greenkeeper Paul Tildesley attributes this, to a great extent, to the purchase a year ago of a SISIS AER-AID JAVELIN.

The irrigation system at the Robin Hood limits them to a maximum of 10 minutes per night for each green, so a wetting agent is mixed into the water. The AER-AID, set at 100mm (4 ins) depth, is used frequently, followed by another application of wetting agent. This dual approach ensures that moisture gets to the roots quickly and makes the most of every precious drop of water.

Even in this year's very dry conditions the AER-AID has been used at least once a fortnight, more when the hectic summer golf calendar would permit. "Disruption of the surface is absolutely minimal," says Paul, "and after three days there is no sign at all." In fact he is heartened by the many comments from members noticing the steady improvement in the quality of the greens.

When he was appointed Head Greenkeeper 2 years ago, he was lucky that his Green Committee was enthusiastic, and supportive of his requests for new machinery to improve the course.

Always keen to investigate new technologies, Paul saw the AER-AID demonstrated on his course and could appreciate immediately the advantages of forcing air directly into the root zone to promote healthy growth. He says, "The Robin Hood is a Parkland course on a mainly clay soil. Solid tining can actually make matters worse and compress the soil rather than open it up. The fracturing effect of the AER-AID is very beneficial. Take a plug out and you can really see the improved root development."

The club had previously used a deep tine aerator but it required a large tractor which in itself caused compaction. Work rate was slow and there was quite a lot of disruption to the playing surface. Paul can use the AER-AID on a lighter compact tractor and it is so fast that he can aerate all his greens in a day.

A big problem on some of the greens was a heavy thatch layer which has now improved significantly. An extra benefit of the AER-AID is that hollow coring tines can be fitted enabling Paul to remove plugs of thatch a couple of times a year, and apply top-dressing.

Some of the greens had "Black Layer" and were actually lifting. The "Black Layer" has been eradicated completely since using the AER-AID.

Even aerating with the AER-AID every two weeks, Paul is still using the original set of tines, which are showing little sign of wear, and he is impressed by how little maintenance over all has been required to keep the AER-AID performing at its best.

Although the AER-AID has been very beneficial in the exceptionally hot summer, it made a real difference during the wet winter months too. The heavy thatch layer holds water, but by using the AER-AID to improve infiltration the greens were kept free of standing water, and in play.

The last word goes to Paul, "The SISIS AER-AID is fast and clean so that you can just get on and get the job done. New technology has made the greenkeeper's job so much easier."