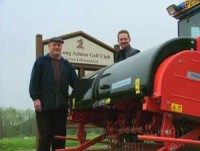 The first commercial version of the new Terra Spike XF, the ultra-fast deep aerator from Wiedenmann UK, has been delivered to Long Ashton Golf Club at Clarken Coombe on the outskirts of Bristol.

Head Greenkeeper Ivor Scoones, a former BIGGA chairman who has worked at Long Ashton for over 40 years, first saw the new XF when he visited Wiedenmann UK's headquarters near Glasgow prior to the official launch in April.

"My deputy, James Braithwaite and myself were very impressed when we saw the XF at a recent demonstration at Erskine Golf Club. The machine is probably three times faster than any other deep aerator on the market today and will save greenkeepers time, which can be utilised on other course maintenance jobs."

James Braithwaite added,
"Part of our ongoing improvements here at Long Ashton involves deep aeration and last August we purchased a Terra Spike XP from our local dealer TH White. The difference to our fairways and greens soon became apparent. 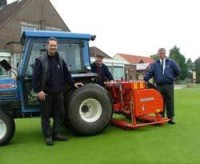 "We experienced a problem with thatch on the greens last summer and suspected that we needed to aerate more often. We took advice from the SARI and they supported our initial suspicions. With the purchase of the XF, we now have two machines so that we can systematically cover the entire course in a planned manner. We now aerate every Monday, weather and competitions permitting and we've seen a significant degradation in thatch build-up, improved root penetration and drainage has also improved

"I used the new XF the day after delivery and despite having to set it up, stop periodically to mentor our new trainee and attend to other duties; I still aerated 13 greens in 5½ hours using 12mm dia solid tines. That's fast!"

Long Aston Golf Club is situated in rolling countryside just three miles from Bristol city centre and is one of the area's premier 18-hole golf courses. It has over 800 members including a thriving junior section and offers a warm welcome to visitors and visiting societies.