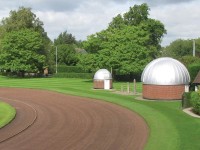 When you're approaching the Manor Road Sports Ground at the University of Leicester, the first thing you notice is the Astronomical Society's metal-domed observatories which act as a handy marker for those looking to find the site.

Upon arrival, you'll also notice that the person responsible for the maintenance of the site has a keen eye for detail. The football pitch, which is surrounded by an old-fashioned but nevertheless neatly presented eight-lane cinder track, is striped to perfection, the surrounding turf is in excellent condition, even the shed is freshly painted.

Adam Tester became Head Groundsman just under a year ago and I'm eager to find out more about his background. As we chat over tea in his track-side office, I quickly establish that, even as a school leaver, he was no stranger to groundsmanship. In fact, it was all he'd ever wanted to do.

He certainly has an industry 'pedigree' and is following in the footsteps of several generations of his family in the vocation. His great grandfather was a groundsman at Chelsea Football Club after the war, his granddad, Peter Kimpton, was a groundsman at the Hurlingham Club and his uncle, David Kimpton, is Head Groundsman at Queen's Club, assisted by his Deputy, son Graham. 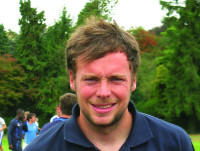 "My best childhood memories are of spending time with my granddad at the Hurlingham Club", he recalls. "It was my playground - and what a place for a young boy to run around in! When I was approaching my final year at school, I did eight weeks' work experience there and received a lot of good advice from Grounds Manager, Peter Craig. I was intent on carrying out my apprenticeship there, but granddad retired that year after 50 years' service and he wasn't happy with the prospect of me living alone in the capital, so I started to look for a position in Leicestershire."

After leaving school, Adam completed his First Diploma in Horticulture at Brooksby Melton College before starting an apprenticeship at Enderby Golf Club, then under the stewardship of Jim Henshaw. Whilst learning the ropes as part of the greenkeeping team he also attained his NVQ Level 2 in Sportsturf. Having completed his apprenticeship, he took up a position at Leicestershire County Cricket Club, spending two years working at Grace Road under the watchful eyes of Andy Whiteman and Andy Ward before taking a job on the groundstaff team at Leicester City Football Club.

"It's hard to say which job I liked the most. I really enjoy cricket groundsmanship, so for hands-on work I'd say the cricket club, but I had a great time working as a team with lads my age at the Walkers Stadium. The camaraderie there was great - I still miss the buzz of matchdays!"

His next move was a total departure from his career strategy but, in Adam's opinion, an invaluable one. He left Leicester City to take a teaching position at CARE Shangton, a residential home for more than fifty people with learning disabilities in south east Leicestershire.

The facility offers its residents a network of support that enables them to lead a full and active life, and one of the activities available to them is horticulture. Adam helped a group of residents learn a variety of skills enabling them to grow and sell bedding plants, perennials, herbs, shrubs and hanging baskets, whilst maintaining the 28 acre estate which gave him the opportunity to pass on his turf maintenance advice. Some progressed to take NVQ and NPTC qualifications and could undertake supported employment at local parks.

"I learnt so much about other people, and about myself. It was my first supervisory role so I had a member of staff to instruct and support and, through teaching others, I learned a great deal about patience, communication skills, to encourage and nurture interest and how to help people achieve their full potential, valuable skills for any would-be manager", he added. 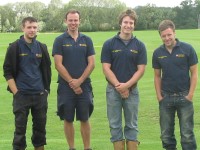 When Adam saw the university job advertised, he knew it was right for him and submitted his application. Following interviews last November he was offered the position. His staff comprise two full-time members, Tim Grigg and Chris Vickerman, and two part-time staff, Richard Kinton and Sam Palmer.

His predecessor, who had retired after a staggering 45 years' service, had kept the grounds in good condition, but Adam wanted the sports pitches to become the groundstaff team's top priority, so he formulated short and longer-term action plans to bring them up to his exacting standard.

"Although the pitches were good I knew there was room for improvement and, with a change in working practices to more effectively use the kit we had, supplemented with modest judicious new kit purchases, a step change in the quality of pitches provided could be achieved."

"Colin Hide, the University's Director of Sport, has been incredibly supportive. I know that many organisations are reluctant to invest in new machinery because they can't see the difference it makes. I made a wishlist of kit that we needed urgently, and explained that he'd be able to see the difference it made in terms of the quality of the pitches and the reduction in the number of games that were postponed."

This year the sports facilities have undergone a number of improvements under Adam's supervision. 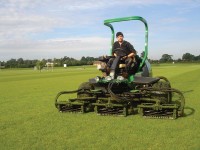 In May, the two all-weather pitches were replaced at the Manor Road site. The tender to supply and fit the new carpets was won by local company, Polytan, the company that installed the pitches originally. The large full-sized hockey pitch had a like-for-like replacement with a slightly improved pile specification for greater player comfort, whilst the floodlit 5-a-side had an improved MultiPlay 24 3G surface laid. 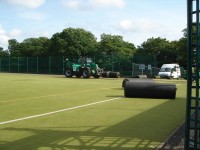 East Midlands contractors Pugh-Lewis sand banded the floodlit rugby pitch prior to the start of the season to improve drainage and to maintain the quality of the surface. The University's men's, women's and medics' rugby clubs use the pitch for training and it's in use almost every weeknight. The wet July helped the operation as the ground was softer and easier to work with.

Soil samples have been taken in advance of the end of season cricket renovations at the Stoughton Road playing fields. We'll be scarifying heavily this year, then we'll spike and topdress before overseeding with British Seed Houses' A5 ryegrass mixture and applying a 4:0:8 fertiliser.

Adam is pleased with the improvements, and hopes to have the remaining pitches worked on next year. "It's all about making progress. My staff hadn't worked with contractors before and it has been good to engage them in the renovation process." 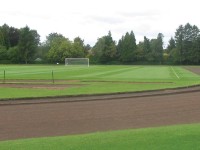 The Sports & Recreation Service at the University, of which the sports ground service is part, has been awarded "Investors in People" and is committed to ongoing training and development for all its staff. Adam, who is hoping to begin his NVQ Level 4 next year, also recognises that people, as well as pitches, deserve investing in.

As well as encouraging his staff to take formal qualifications in groundsmanship, he has offered them the opportunity to spend some time at Leicester City so that they can learn more about maintaining pitches at the highest level. He also plans to organise visits to other Midlands universities and schools so that he and his staff can exchange ideas on working practices.

Colin Hide agrees that there's no doubt that high quality, well presented sports facilities help 'sell' universities to prospective students. "Students want and expect high quality facilities and that's what we aim to provide. Aesthetics are important, because people buy with their eyes and the sports ground staff play a big, big part in providing an attractive sporting environment which students and staff want to use. We also encourage students to take part in 'positive recreation' as part of a healthy lifestyle." 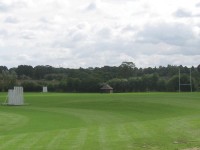 "Providing first class pitches for our students is the groundstaff's priority and I wouldn't compromise them in order to bring in additional revenue. Some of our facilities, such as the all-weather pitches, are hired out by community groups, others are used at off-peak times when our students don't need them."

To ensure that it continues to meet the high student demands, the University will submit a planning application for the redevelopment of the Manor Road site in November, incorporating a new gym, swimming pool and possibly a new running track. If the application is successful, work will begin next spring.

Colin added: "Adam has been with us a year now and has done a great job. He has brought a fresh pair of eyes, new ideas and methods of working and made a very noticeable difference to us. We have had lots of favourable comments from users. Groundstaff have a huge opportunity to provide attractive venues for sport at all institutions at cheap-as-chips prices - certainly compared with new buildings - all it takes is a little vision, plenty of hard work and support from the boss. But let's be clear - if it's good - they will come." 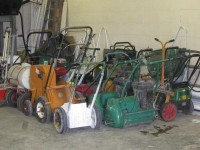