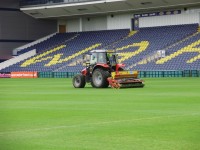 In virtually every sphere, groundsmanship has transformed out of all recognition in just a generation. Not only have technical and scientific demands reached unprecedented heights, but also pressures on groundstaff have been placed into even sharper relief given the boom in televised sports: turf quality and performance have to be better than ever and to be seen to be so.

Once upon a time, turfcare professionals knew which grass seed was suitable for the particular time of year, and worked accordingly within seasonal constraints to attain optimum results from it.

Ryegrass has long been a species that has undergone vast swathes of research and development in a bid to harness its hardy virtues for year-round application.

After thirty years of trialing ryegrass cultivars, the industry is entering a truly revolutionary era - one where the culmination of so much research into ryegrass has created a reliable species for utilising in any overseeding programme, in any season.

New turf type tetraploid cultivars (4Turf) have been trialled at UK sites and are about to be unveiled in early 2012 in a move, it is believed, will bring a wholesale shift in

the effectiveness of overseeding, whatever the season. In particular, these ryegrass cultivars are expected to address many of the issues groundstaff face when trying to overseed in winter.

Winter overseeding poses one of the toughest challenges for groundstaff, who have limited hours to work, diseases to contend with, competition from unwanted species and poor conditions for germination due to low temperatures and light levels - all issues further exacerbated by modern stadia, which often allow little natural light to fall on the grass through the winter months.

Despite the pitfalls, overseeding at this stage of the year is beneficial to maintain surface quality and ensure a denser sward to withstand the rigours of winter play.

Late autumn, into winter and early spring represent some of the least productive times for growth, leading to periods where poor plant coverage and appearance can persist.

The science behind the improvements in winter stress tolerance characteristics is simply explained. Traditional turf type perennial ryegrasses (diploids) have two sets of chromosomes - tetraploids have four sets, and 4Turf seeds are one and a half times larger than regular turf type ryegrass. Because of that characteristic, they can produce seedlings quicker, and generate a thicker sward, so turf is no longer resigned to poor growth and the characteristically thin, patchy appearance.

The biggest benefit of the tetraploid is the winter disease resistance. The picture above, from a breeding plot last winter, shows a range of diploids that were all badly hit with snowmould, yet all of the tetraploids remain virtually untouched. The increased seed size also gives them the ability to establish quickly and at lower temps than regular diploids.

What is new and unique is that this new grass, with its specific features combined with traditional grasses, has created a new range of seasonaly specific overseeding mixtures that are designed to work best when utilised as an overseeding programme.

The company leading the way in these developments is DLF, which has funded the research and trials into these cultivars. In particular, field trials conducted in January 2011 in The Netherlands have demonstrated just how successful these types were in winter overseeding programmes, with almost double the wear tolerance and faster establishment time.

The new ryegrasses have been combined with Poa trivialis for increased winter shade tolerance, and with low temperature germinating diploid perennial rye for outright wear tolerance. Each mixture is designed to maximise overseeding results in a specific season.

Perhaps the most dramatic effects are that they allow groundsmen to extend the traditional sowing season by as much as four months.

The benefits of this better protection in cold temperatures was realised earlier this year when Martin Knight, Head Groundsman at Worcester Warriors Rugby Club applied one of the new mixes, Johnsons J Rescue, at the back end of 2010, in what was one of the UK's coldest winters. The results that Martin found allowed play to progress with few cancellations through, what was, an intensively fought campaign in bitter winter weather.

For further information on the new tetraploid mixture, visit www.dlf.co.uk