by Callie Anne Prater and Daniel A. Potter
in Consultancy
on 24 Sep 2004

BY Callie Anne Prater and Daniel A. Potter

In summer of 2003 University of Kentucky scientists made a serendipitous discovery that may provide a new tactic for safe and long-lasting control of Black cut-worms (BCW) on golf courses. Their discovery includes:

The black cutworm (BCW), Agrotis ipsilon, is a major pest of golf courses and sports fields in the US and throughout the world. The BCW larvae make burrows in the thatch or soil, or occupy aerification holes or other cavities, emerging at night to chew down grass blades and stems around the burrow. Birds probing the turf for a meal of juicy caterpillars may pull up tufts of grass with their beaks, further reducing smoothness and uniformity of the putting surface (3).

Because of the low tolerance for such damage, BCW warrants frequent insecticide applications. Some superintendents treat every two to four weeks during the growing season as a preventive measure. Although most modern turf insecticides are intrinsically less toxic than products used a generation ago, some still have the potential to adversely affect pollinators, decomposers, and beneficial natural enemies (predators and parasitoids) that help buffer the turf against outbreaks (3).

Some insecticides have the potential to run off or leach into surface or groundwater, and to impact aquatic organisms and wildlife. These issues, along with societal concerns, have led to increased restrictions and loss of some insecticide registrations. Some communities have already mandated that only so-called "organic" fertilizers and pesticides be used on turf. The turfgrass industry itself has set forth a new initiative to seek alternative biological controls. 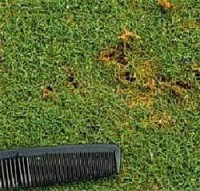 In summer of 2003 we made a serendipitous discovery that may provide a new tactic for safe and long-lasting control of BCW on golf courses. We were collecting large numbers of BCW from six Kentucky golf courses to survey for parasitic insects, but our study was thwarted when <75% of the field-collected larvae died from a pathogen infection. Diseased larvae showed necrotic spots covering the integument (skin) followed by a swollen, milky white appearance. Death by liquefaction occurred within a few days. 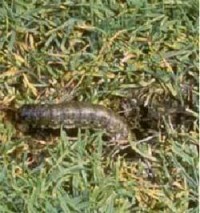 With help from colleagues in our Insect Virology Unit we were able to isolate and purify the mystery pathogen from BCW cadavers and sequenced it using PCR analysis, providing a genetic "fingerprint" useful for identification.

The KY strain was amplified by feeding it to healthy caterpillars, allowing them to die, and then harvesting more virus from their carcasses. Liquid and bait formulations of the virus were tested in the lab and field in autumn 2003. High mortality (80-90%) from virus was obtained in both trials. More extensive tests were carried out in summer, 2004.

(picture right, The BCW larvae make burrows in the thatch or soil, or occupy aerification holes or other cavities, emerging at night to chew down grass blades and stems around the burrow) 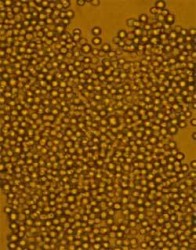 This second generation of virions then becomes coated by a protective protein layer called polyhedrin. The virions plus protein coat
are now referred to as occlusion bodies. The insect's cells are unable to contain the numerous occlusion bodies and eventually rupture. The insect liquefies internally and dies. The integument soon ruptures releasing the liquefied contents containing millions of virus particles into the environment (4).

(picture left, As a result of the protein crystallized coating, baculoviruses are able to persist in the population as well as in the environment for extended periods of time). 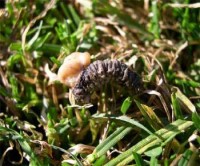 (picture right, The insect's cells are unable to contain the numerous occlusion bodies and eventually rupture. The insect liquefies internally and dies. The integument soon ruptures releasing the liquefied contents).

Potential of Baculoviruses for Insect Control

Baculoviruses have the potential to be ideal biological control agents. Their protective protein coat dissolves only at a specific pH and other conditions found in the gut of host caterpillars. This specificity enables the virus to control pest populations without harming non-target organisms (3). Baculoviruses are also known to only infect the particular insects to which they are adapted and therefore are safe for humans and other vertebrates, as well as plants. Additionally, as a result of their protein crystallized coating, they are able to persist in the population as well as in the environment for extended periods of time (1).

Once established, baculoviruses may remain active in upper soil layers for many years. This persistence might allow for fewer applications compared to chemical controls and possibly season-long, or even multi-year control. Baculoviruses also are highly pathogenic allowing them to spread quickly throughout pest populations. On the downside, the specificity of action that is an advantage in one context limits the potential market for a commercial product compared to conventional insecticides that control a broader range of insect pests. 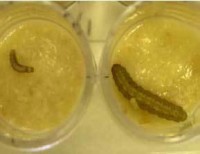 (picture left, When young larvae become infected, their growth and development are stunted and they die while still small).

These viruses also have the ability to be mixed with fungicides, herbicides, as well as other insecticides and used in conventional spray equipment. Unlike some chemical controls, baculoviruses do not have broadly toxic residues that may adversely impact the environment. There have been 15 cases of successful, permanent biological control with insect viruses (2). For example, viruses were used to suppress the European spruce sawfly in Canada and the United Kingdom. In one study, researchers applied an NPV for control of soybean loopers and when the plots were reevaluated 15 years later, the virus was still providing about 63% control (2).

In our USGA-funded project we are evaluating the potential for developing this insect-specific virus as a bio-insecticide against BCW in turf. So far we have made some interesting discoveries. For example, most larvae die within a week after becoming infected with the virus. When young larvae become infected, their growth and development are stunted and they die while still small. In contrast older infected larvae may continue to feed up until the day of death. Thus, the virus may be better suited as a preventive for season-long suppression than as a rescue treatment in response to damage. We are continuing to evaluate field efficacy of AgipMNPV under golf course conditions.

For example one of the main factors limiting the use of baculoviruses as bioinsecticides is their tendency to be degraded by exposure to ultraviolet (UV) light. We currently are evaluating if Agip MNPV formulated with optical brighteners may enhance stability of the virus in sunlight and provide better suppression of BCW under field conditions. Irrigation is another factor that may affect the virus. We also are comparing effectiveness of the virus with and without irrigation, and in combination with spray adjuvants (eg spreader/stickers) to increase the virus's foliar persistence.

Persistence of the virus in the host population is vital for sustained control. This is dependent upon horizontal transmission from insect to insect. When larvae die from a viral infection, they release millions of occlusion bodies into the surrounding environment which may infect other host larvae. We will be determining the probability of healthy larvae contracting the virus after feeding on turf cores where infected larvae have died. This will give us an idea of how easily this virus is spread throughout the population. We also hope to determine if there might be a synergistic interaction between the virus and endophytic grasses. In other words, " will feeding on endophytic grasses make BCWs even more susceptible to the virus?"

This is the first research to investigate use of a virus to control an insect pest in the turfgrass environment. Given the increasing restrictions on broad spectrum pesticides, this type of research is necessary to ensure that professional turfgrass managers will always have adequate alternatives to chemical control. We have seen naturallyoccurring baculovirus nearly wipe out localized BCW populations on golf courses in some years. Thus we are optimistic that commercial development of Agip MNPV baculovirus could offer a viable alternative to traditional insecticides for that perennial pest.

We envision that golf superintendents might apply Agip MNPV early in the growing season as a preventive measure, causing high mortality in the first generation BCW populations. Death of those larvae will in turn create a reservoir of virus in the soil and thatch that perpetuates control of BCW through the growing season. The tactic would be both cost effective and environmentally sound, resulting in need for fewer chemical applications. We hope the groundwork provided by this project will encourage interest in developing new biological insecticides for use on turf.