The Old Trafford Cricket Ground, usually known simply as Old Trafford, has been the home of Manchester Cricket Club since 1856 and of the Lancashire County Cricket Club since it was founded in 1864. International Test matches have been played there since 1884 - it was the second Test ground in England after The Oval and before Lord's. 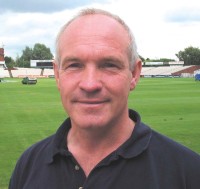 The grounds, in those days, were quite remote, to the extent that the then groundsman also held the shooting rights over the outfield! The land, when purchased, was noted as a good level sandy field. By the 1880s Old Trafford was considered second only to Lord's as a cricketing venue.

The only major renovation to the outfield since the 1860s was to fill in a crater left after a bombing raid in 1940.

The ground has suffered over previous seasons from slow drainage and, with the vagaries of the infamous Manchester weather, the incidence of delays and cancellations had become a major issue for the club.

Having seen the benefit of drainage improvements at other grounds, most notably Lord's, Lancashire CCC decided that, as nothing could be done about the weather, a new and efficient drainage system for the outfield would enable more cricket to be played.

Retiring Head Groundsman, Peter Marron, conducted a lengthy investigation in to the best construction methods and specifications. His concern was to tailor the final construction detail to meet Old Trafford's specific requirements. 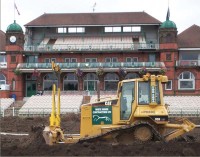 After a period of consultation White Horse Contractors (Northern) were appointed to undertake the reconstruction of the entire outfield and, after much discussion, a final specification was arrived at.

This consisted of removing 400mm depth of the outfield, laying a new drainage system of mains pipe and laterals at five metre spacing, installing a gravel carpet and importing sand based rootzone to a depth of 300mm. The critical item being the characteristics of the rootzone.

The club were keen to have an outfield that drained well, but not one that would require excessive artificial irrigation and high amounts of fertiliser to promote grass growth.

Samples were provided of various sand: soil and sand: compost mixes. A final choice of sand: compost mix was settled on based on its ability to drain, retain nutrients and promote healthy grass growth.

Immediately after the R.E.M. concert, on the 24th August, work began on the eight week reconstruction programme. Given the known nature of the Manchester weather, the programme devised required a rapid construction to take advantage of anticipated better conditions in late August through September. How wrong can one be!

The work programme required that, after excavation to formation level, three construction items needed to be underway almost simultaneously - pipe drainage, drainage carpet construction and rootzone installation. And, whilst this work was going on, irrigation contractors, LS Systems, would be installing a new sprinkler system to the outfield.

Within a week the outfield had been excavated to formation level and over 6000 cubic metres of material removed, exposing, along the way, the backfilled bomb crater. This was followed by the drainage gang installing, through a period of exceptionally poor weather, over 3500 metres of drainage. With constant disruptions from the inclement weather, something experienced on most sport field contracts this year, the team managed to bring this section of works in on schedule.

As the drainage proceeded around the outfield, so the drainage carpet was taking shape immediately behind. Once a sufficient area of carpet had been installed rootzone was brought in, placed and levelled by bulldozers fitted with laser levelling equipment, to final grade. The final surface preparation, fertiliser application and seeding being completed by the White Horse finishing gang.

The outfield was seeded with a dwarf rye mix, predominantly with the new fine rye varieties at the top end of the STRI list of grass seeds for sports fields. An organic based slow release fertiliser was incorporated in to the rootzone prior to seeding.

Despite the poorest weather experienced in a Manchester 'late summer' for many years the team completed construction on time and in budget. Seeding was completed by the 17th October.

Subsequent to completion of seeding, Lancashire CCC secured a three night concert date for 2009. In light of this, and after consultation, it was decided that to be sure that the grass surface was sufficiently strong enough to accommodate the concerts, the outfield would need to be turfed.

White Horse was instructed to proceed with the supply and installation of 16,000 square metres of Lindum Turf's washed turf. This was preferred as it would mitigate against any problems of introducing a soil based turf on to rootzone. A problem with soil layering and subsequent poor root development has been known using soil based turf on a rootzone, unless it closely matches the medium that the turf was grown on. Installation was completed in a two week period.

The facility has now been handed back to the Old Trafford staff to bring in to play next season.