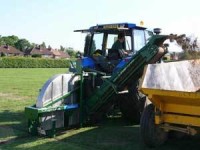 "As a sporting institution, our reputation goes well beyond these shores," says Head Groundsman Mark Freeman, "and we wanted to increase the playing hours on our five rugby pitches. We could be putting out up to 10 teams at any one time. We've got three rugby league teams, 5 men's rugby union teams, 2 women's rugby union teams and inter-hall rugby, which is played continuously during the autumn and winter terms. The drainage systems put in, in the 70s and 80s, were beginning to fail and we've been systematically upgrading for the last ten years. Pugh-Lewis installed new drainage on our 1st team pitch two years ago, putting laterals at 6m centres and sand slits at 1m. With this pitch, for our second team, I specified laterals at 7m centres with sands slits one metre apart."

Having created a new main drain along the touchline, with laterals as specified, Pugh-Lewis' new Supertrencher was brought into play to install the sand slits, and was found by James Pugh-Lewis to be "easier to set up and less prone to blockages" than the company's older model.

As the majority of students don't return until the beginning of October, all but the two main rugby pitches used by those playing in local leagues, enjoy over a month extra off-season.

"Our second team pitch is naturally very flat, and once the new drainage is installed, Pugh-Lewis will fraise mow the surface to get rid of annual meadow grass," continues Mark Freeman. "The area will then be hollow tined at 60mm centres, after which they'll apply a pre-seeding fertiliser at 35grams per square metre and a sand based top dressing at the rate of 20 kilos per square metre. The surface will then be dragged with a drag mat to break the cores down, mix these with the top dressing and fertiliser and redistribute over the surface. Much of this will be returned to the holes made by hollow coring and aid in surface drainage."

Over seeding will follow, using a Ryegrass mixture of 4 different varieties.

"We steer away from monocultures as a protection against disease etc," explains Freeman, who has been at Loughborough for over 17 years.

Once the new grass is established Pugh-Lewis will return, just before season to verti-drain. "We like to do this in September if we can, just after the first rains which water the top 75 to 100mms, minimising surface disruption," Freeman continues. "Ideally the soil beneath this depth will be dry, and the verti drain will create effective fissuring."

For further information on the services provided by J Pugh-Lewis, contact the company on Tel: 01773 872362 or visit their website at: www.pugh-lewis.com