Following the establishment of Deere & Company's worldwide Agriculture & Turf Division as a single business unit in May 2009, the company has been restructuring its sales & marketing organisation in Region 2 - which covers Europe, the CIS, North Africa and the Near & Middle East - in order to serve customers and dealers more effectively.

As a result, several new Langar-based appointments have been announced by John Deere Limited, as part of the streamlining of the UK and Ireland business to be more focused on sales and dealer development.

Joedy Ibbotson has been appointed as turf division sales manager for the UK and Ireland, replacing David Hart, who has taken on a new key strategic role within Region 2.

Joedy began his career with John Deere Limited in 1999 as a commercial & consumer equipment (C&CE) area service manager, going on to become an agricultural area manager product support and then a C&CE territory manager for the Midlands in 2001. In 2006 he was promoted to the new role of manager, national accounts for the UK and Irish turf business, and in 2009 he moved to Deere & Company's European Office in Mannheim as commercial segment manager. 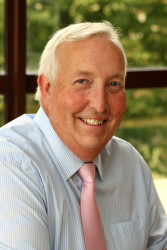 Gordon began his career with John Deere Limited in 1983 as a training instructor. In 1986 he was promoted to area service manager and in 1990 he became territory manager for the West Midlands. In 1995 he was promoted to product manager for tractors and loaders, in which role he was instrumental in overseeing the development of the company's tractor business to its current market leading position in the UK and Ireland.