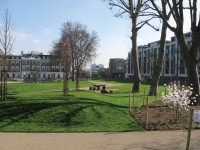 "The turf, at this point did not exist. Nobody had grown a sward that could fulfil the demands of a green roof situation, extreme shade, the heavy wear of a public space and yet demonstrate aesthetically pleasing, fine leaved characteristics"

The park within Arundel Square in the London Borough of Islington is a picture. A serene half hectare of green space surrounded on three sides by Victorian town houses and, on the fourth, a five storey modern apartment block.

Should you walk through it as a non resident and visitor to the area, you would notice the newness of the curving paths, the tree guards surrounding new, young trees, the fact that the equipment in the children's play area looks recently installed and evidence of fresh planting in newly constructed beds. You would surmise, quite rightly, that Arundel Square had had a revamp, and been thoughtfully and tastefully landscaped, but never in your wildest dreams would you imagine that a third of this park is actually a green roof. Beneath the pristine turf on the south side lie five 400 square metre sections of concrete that span 108 metres of railway cutting, housing the North London over-ground line from Richmond to Stratford and, beneath that, the final section of the Euro Tunnel link into St. Pancras. 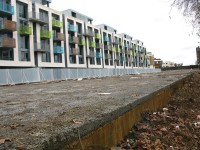 combined their individual specialist skills to create a grass covered trompe-l'oeil, a masterpiece in visual deception and land reclamation that, by setting a precedent, could change acres of currently unused wasted space into communal green space. But, the beginning of this project started way back before the last decade.

"The idea was first mooted by Bill Thomas of Pollard Thomas Edwards Architects eighteen years ago," says Andrew Life, Acting Projects and Development Manager for Islington Council. Bill's scheme involved the construction of a new apartment block on the other side of the railway with a concrete 'deck' spanning the cutting and joining the existing Arundel Square gardens. "In due course, the developers and the council came to an agreement whereby the local community would gain by getting a larger park, and the new apartment building would be complemented by an attractive public open space in front of it."

"As a consequence of the developers building effectively a green roof over the railway cutting, we were able to increase the size of the gardens in Arundel Square by one third," Andrew explains. "Considering that, as a borough, Islington has the second least amount of green space in central London, this was a significant benefit for local people."

By the time Andrew became involved, the concrete 'deck' (effectively a bridge) was in place and the council had appointed Remapp Landscape Architects to create a 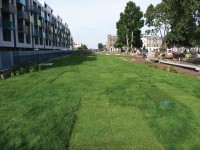 new design for the extended park, and to project manage the whole scheme. "The concrete deck was built over the railway cutting between 2005 and 2006," says Frances Christie of Remapp. "The new apartments were built between 2007 and 2009, finally completing the square. The proportions now feel right."

Remapp began the project in 2006, but progress was subject to many complications and delays. The design needed to unify the existing section of the Victorian park, with its one hundred year old mature trees, and the new concrete deck or 'green roof' section, where planting and soil build ups were restricted by engineering and loading constraints.

The concrete 'deck' had been set at variable heights above the existing park levels, which created another problem when it came to unifying and integrating the old and new areas. "We couldn't build up the soil levels on the existing park, as this would have involved piling soil on top of the roots of the mature trees," Frances continues. "We resolved the levels differences (up to one metre in places) between the 'deck' and the existing park interface by creating subtle earth modelling and retaining walls." The concrete deck had been engineered to provide a low level flat area of turf only, which would have visually isolated it from the rest of the scheme and made it look like a separate compartment. "We wanted the deck to have both variation (as far as possible given the original constraints), but also work with the existing area as one space," Frances explains, "which is why Tim O'Hare Associates were then appointed to research the possibilities of creating a specialised, lightweight soil and drainage system." Lightweight geofoam blocks were also installed to create a more undulating and varied landform on the deck.

Meanwhile, as the area was a public space, a long consultation process with the residents began. "Arundel Square houses a wide cross section of people with varying income levels," Andrew Life explains. "The new block includes luxurious private penthouse apartments and some social housing units, whilst a number of the 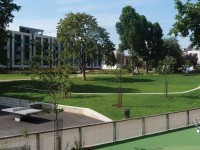 original Victorian houses are owned by housing associations and are split into flats for low income, rental tenants. Many of the residents don't have gardens and we have varying age groups to consider. We had to take into account the needs of young people and children, on the one hand, whilst also catering for older adults and people with disabilities. We didn't want the park to become just a recreation ground."

Tim O'Hare got to work on a suitable soil for the project, bearing in mind that the 'deck' had originally been designed to hold a soil depth of 300mm, which would not accommodate Remapp's design. "The landscape design dictated a mounding and small trees on the deck, so we needed a lightweight soil," he recalls. "There was to be no automatic irrigation on this section of the park although it was, ostensibly, a moisture hungry green roof and the area, on the south side, was subject to shadow cast by the building and, therefore, deep and permanent shade during the winter months. We needed something that would allow surplus water to drain away and yet keep moisture within the soil profile to sustain the planting and the turf."

The turf, at this point did not exist. Nobody had grown a sward that could fulfil the demands of a green roof situation, extreme shade, the heavy wear of a public space and yet demonstrate aesthetically pleasing, fine leaved characteristics. As the single, most important unifying element of the whole scheme, the turf was of utmost importance. Frances, Tim O'Hare and Andrew Life met Stephen Fell of Lindum Turf in 2007 to discuss the project, after which a unique seed mixture was devised.
"Together with Jayne Leyland of Barenbrug we put together a special turf mixture which we called the 'Arundel Square Mixture'," Stephen Fell recalls. "We used Tufted Hairgrass, which combines shade and wear tolerance, is fine leaved with high shoot density and continues to grow later into the winter than other species. We 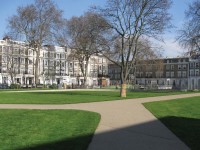 combined this with Hard Fescue, which has the ability to recover from drought and also has good shade tolerance, along with Bargold ryegrass, a fine leaved, hard wearing ryegrass which exhibits greater shade tolerance than most ryegrasses. Slender creeping red fescue was added, with its rhizomatous growth, to aid recovery. This was a mixture that I thought would bring together some of the latest advances in grass breeding and fulfil the particular demands of this project." Lindum grew approximately 6000 square metres of their 'Arundel Square Mixture' as a bespoke turf product in 2008, completing deliveries in 2010.

Tim O'Hare, taking into consideration the needs of Remapp's design and Stephen Fell's turf, along with weight restrictions from the project's consultant structural engineer, Tom Dilly, had perfected his manufactured soil, a blend of sands, clays, compost and lightweight aggregates, and put it into production.

As an inner London square, with one point of access and a dedicated access route, the company couldn't bring in any articulated vehicles, there wasn't the space, and they had very limited storage facilities. All deliveries had to be strictly coordinated."

The Landscape Group's project manager visited the site two or three times a week and was in day to day contact with his site manager, site engineer and working foreman. He liaised with the whole team, Frances, Tim O'Hare, the consultant engineer for Network Rail who constructed the concrete deck, and Tom Dilley. The landscape contractors were limited to the use of very small machinery because of weight restrictions on the green roof, which had control stations at four metre intervals so that the structural engineers could record movement.

Despite the challenges, by December the project was finished, apart from the final touches to Remapp's planting plan. After years of looking out onto a building site, the residents of Arundel Square had their long awaited green space.

The original mature trees are now under planted with woodland, dry and shade loving plants, and different levels have been introduced so that the green roof section blends into the whole. The 'deck' or 'green roof' sports various small flowering trees and swathes of drought tolerant herbaceous perennials and ornamental grasses. There are quiet, secluded seating areas for adults and the elderly and a new play area and ball park for the children.

The park, with its south side apartments, looks finished and in proportion and, instead of a railway cutting, it has grown an extra one third in size. The council, which has used the surplus half field of Lindum's 'Arundel Square Mixture' turf for the Joseph Grimaldi Park near Kings Cross, is delighted. Extra green space has been created for Islington's urban residents, and a precedent has been set which could mean reclaimed park land over many more railway cuttings in the future.

Tim O'Hare can be proud of the fact that his expertise has gone a long way to making the project possible, and Frances Christie can look out over the redesigned Victorian square gardens and forget all the problems when she sees people enjoying it. "That's what makes it all worthwhile" she says, "the fact that its being so well used by a diverse number of people." Stephen Fell, satisfied that his 'bespoke' turf has fared well over the last gruelling winter, now has an exciting and important new landscaping product. 'Arundel Square Mixture' will be marketed as LT Shade.