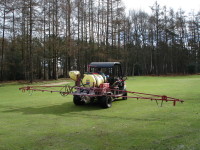 Fusarium patch can harm the health and integrity of UK professional sports turf at any time of the year. The fungal pathogen (Microdochium [Fusarium] nivale) will grow and develop within a wide range of temperature (-6 to 30ºC), responding most rapidly under cool wet conditions on tired turf as summer moves into autumn.

Fusarium follows the weather and was active on most greens at Tilgate Forest Golf Centre in Crawley Sussex during summer 2007, when Head Greenkeeper Colin Chilvers started a trial with Bayer's brand new turf fungicide called DEDICATE®. And no wonder Fusarium was active at Tilgate, given that rainfall figures for May and June at 102 mm and 130 mm respectively were 38% and 155% higher than the preceding 10-year average.

Tilgate Forest Golf Centre managed by Glendale Golf is one of the very best 'Pay and Play' courses in the south of England, and prides itself on the quality of its course which tests all golfers irrespective of standard. Tilgate is famous for its tree-lined fairways and well-guarded greens, but surrounding forest and trees which give the course its character (and name) does have a downside as far as Fusarium patch disease is concerned.

"Fusarium is a perennial problem for turf at Tilgate", says Colin. "The course was 'carved out' through forest, so the greens are generally low on light and aeration due to the surrounding trees. Species composition in the 25 year old swards is bent/fescue and Poa.

"We just about manage to keep the lid on Fusarium using a multi-product spray programme", says Colin. "We desperately need something that acts fast and lasts as long as possible, thus reducing the number of applications required. And with low product rate and reduced water volumes to fit in with our general move towards more environment-friendly golf course management." 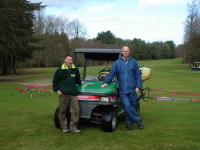 Fourteen greens on the 18-hole course were already scarred by Fusarium when Dedicate was applied, with infections showing up clearly as darkened patches under the early morning dew," says Colin. "Just as well that Dedicate combines curative and preventative action with both contact and systemic activity", observed Chris Briggs, Business Development Manager of Avoncrop Amenity Products, who organised the trial.

Dedicate from Bayer Environmental Science combines trifloxystrobin and tebuconazole formulated in a user-friendly flowable liquid product for application at low product and volume rates. Colin used his Hardi boom sprayer mounted on the back of a Cushman to apply Dedicate on 11 July 2007. The machine, with a fully outstretched boom of 24 ft that carries 16 Hardi grey (F-06-110) nozzles, applied Dedicate at a rate equivalent to 1 litre of product per hectare in 400-500 litres of water. "This was significantly down on the 600 litres per hectare normally used for other products" said Colin.

He was impressed at how quickly Dedicate started to act and in such small amounts. Fusarium was checked and arrested within days and by 23 July his greens were clear of disease. Dedicate fungicide cured established infection allowed the grass to 'grow out' from the disease and prevented further infection all in double-quick time.

Dedicate is rain-fast within one hour of application and had managed to perform under some very Fusarium-friendly weather conditions in July. Monthly rainfall at 125 mm was a massive 247% higher than the preceding 10-year average, and the distinctly cool average daytime temperature of 16ºC was a whole 3ºC lower than preceding 3-year average.

Apart from first class control of Fusarium, other benefits related to the reduced use of pesticide were not lost on Colin. "With such low rates of product (1 litre per hectare) and reduced spray volumes there is less operator exposure throughout the whole spraying process including mixing and application," he said. "With our traditionally used products sold in 3 or 5 litre packs for application at rates up to 30 litres per hectare there is a lot of storage, mixing and empty pack disposal."

A few months after treatment with Dedicate the greens were still Fusarium-free and did not require any further fungicide treatment until 15 October. Colin Chilvers is on course to save time and money with Dedicate, available in the sports turf and amenity market since January 2008. Together with a turf nutrition programme introduced by Chris Briggs (Avoncrop Amenity Products) to boost turf resistance to disease, future use of Dedicate looks set to deliver the consistent quality product demanded by players and greenkeepers alike at the popular Tilgate Forest golf course.